A very happy New Year to cycling or non cycling gobs one and all!

Bike Gob loves to jump on the bandwagon so has prepared an end of year awards list for 2014 to add to all the many others you will doubtless be ignoring on your social media streams today as you fail to make your eyes focus on anything let alone a screen with words on it in a post hoggers fog of despair and regret.

So without further ado, Bike Gob brings you 2014's good Gobs and bad Bogs of the year: 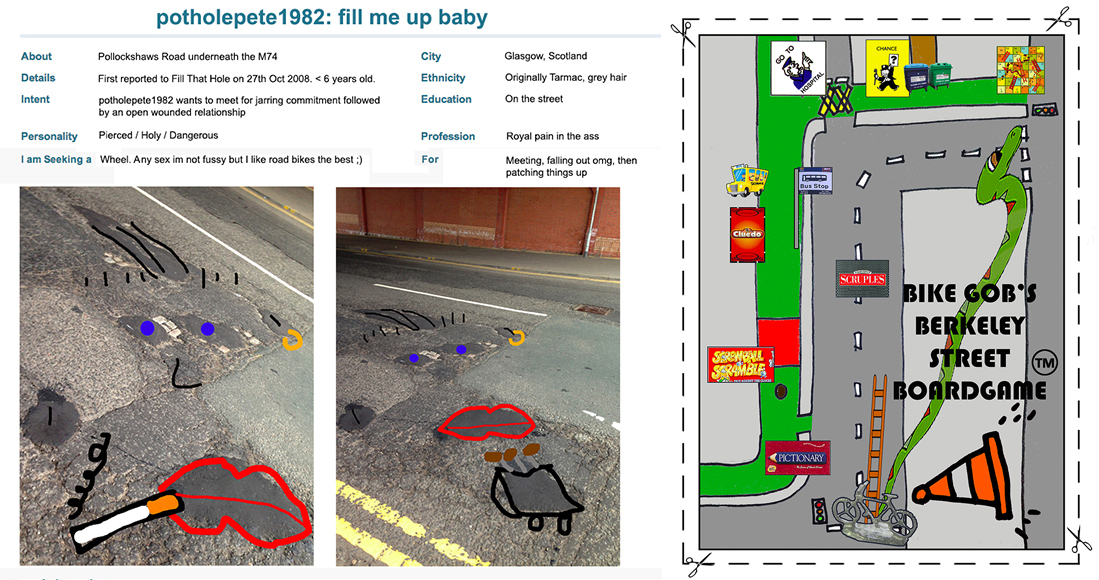 Gob!
Bike Gob is delighted to report that Pothole Pete has found love and moved on to cements anew. A lovely new smooth and cobble free stretch of tarmac has taken Pete's place since he was added to Fill That Hole and for this Bike Gob is very thankful. Bike Gob would like to wish Pothole Pete a fruitful and happy year ahead away from our roads. KEEP IT IN THE BEDROOM PETE!

Bog.
Berkley Street remains the worst example of money spent on cycling infrastructure that Bike Gob has yet to come across in Glasgow and nothing has changed since the legendary 'Bike Gob's Berkley Street Boardgame (TM)' hit the shelves and has been entertaining parties since July. Bike Gob says SORT IT OUT!

Gob!
Glasgow's so called "Cycling Tsar" Frank Mcaveety has sat up and paid attention to Bike Gob's video 'Glasgow's Cycling Award' and true to his word, has responded in full in a manner of speaking to (some of) the issues highlighted by the film. Watch this space for the response in full and Bike Gob's further response to the response coming this way very soon. But for now, Bike Gob takes Bike Gob's helmet off to the Big Man for his promise to hopefully do something to help improve the state of our cycle paths. KEEP IT TRUE FRANK!

Bog.
Danny Macaskill managed to refrain from a response to the poor and outdated choice of doing lame tricks around a bunch of Playboy Bunnies highlighted in Bike Gob's other video 'Bike Gob at the Play Girl's Palace'. Maybe he was just too embarassed by being shown up by Bike Gob's own awesome jumps but, POOR SHOW DANNY, POOR SHOW.

Bog.
Let's be honest, it was fun for a few minutes, and the passersby found it amusing, but the Dragon Bike Jousting wasn't really all that good now was it. GIDDYUP!

Gob!
2014's commenter of the year award goes to.... WheelyNice69! Bringing Bike Gobs discussion columns a fine mixture of smut and wit, Wheelynice69 has regularly brightened Bike Gob's day. BOG OFF WHEELYNICE69 NO YOU KNOW NOTHING!

Bog.
Neatly proving Bike Gob's point about sexism still prevalent in cycling society, Bike Gob would like to thank the forum gobs on Glasgow Fixed Gear for their clueless comments about Bike Gob at the Playgirl's Palace. MACASKILL LUSTING LOINS!!

Gob!
It pished with rain but Bike Gob didn't care, Bike Gob had the time of Bike Gob's life watching world class cyclists zooming real fast around the streets of Glasgow. And what's more, some of the potholes that were repaired for the race are on Bike Gob's commute and so Bike Gob continues to relish the wonder that was, The Gobbonwealth Games Road Race. SKIN IS WATERPROOF!

So congratulations to all. Now, eyes forward gobs, here's to a gobtastic 2015.

Bike Gob was delighted to receive a response from Councillor Frank McAveety, Glasgow City Council's cycling representative, to Bike Gob's Glasgow's Cycling Award video and wants to share with you 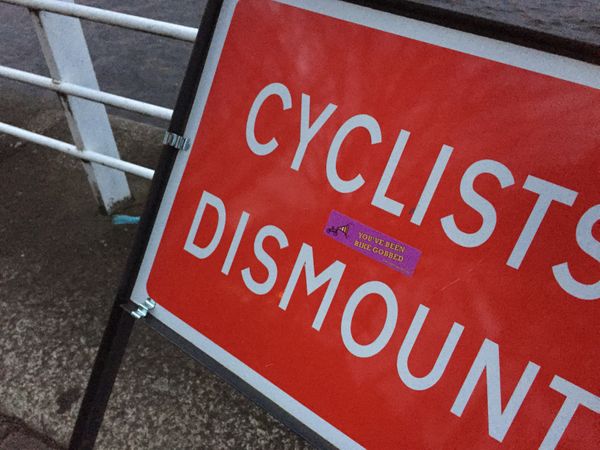 Cyclists Dismount signs - aren't they just great! When blue and legally only advisory they actually appear to issue a command allowing surrounding gobs to stand and point and tut