Cyclists Dismount signs - aren't they just great! When blue and legally only advisory they actually appear to issue a command allowing surrounding gobs to stand and point and tut "Just look at that bloody cyclist disobeying the sign. Probably goes through red lights too like all the rest of them. AND they're not wearing a helmet. Bloody cheek. Your wheel's following you! Ahahahaha.". Cycling gobs know these signs should actually be read as Cyclists Be Aware but with wording like that, non cycling gobs really aren't to know.

Meanwhile the red temporary signs are commonly mis-used, over-used and not removed. This morning Bike Gob met this friendly greeting alerting cyclists to works happening along the NCN 75 at the Clyde. Meaning to say "WATCH OUT FOR A NARROW PATH AND WORKMEN AND POSSIBLY EVEN ROPES THAT NEDS HAVE PUT ACROSS THE PATH SO PLEASE SLOW DOWN AND TAKE CARE BUT THANKS FOR BRAVING THE WEATHER AND HELPING KEEP THE POLLUTION AND TRAFFIC AND NHS BILLS IN OUR CITY DOWN AND MAKE SURE AND HAVE A NICE DAY", the CYCLISTS DISMOUNT command purports to entirely prevent cycling on one of the busiest cycle paths in the city, where there is in fact still plenty of riding room. And yes, there isn't room on a sign for all that, but there is room for CYCLISTS BE AWARE.

These works have been on going since the Commonwealth Games big wigs left town. Over four months ago. The NCN 75 is a National Route on the National Cycle Network. THIS IS THE EQUIVALENT TO A DRIVERS MOTORWAY. The work happening is the equvialent to work on the hard shoulder closing the full lane with a sign requesting drivers to get out and push. Bike Gob looks forward to seeing signs like this one below in the near future in our fair and equal cycle friendly city. Or maybe just improvements to the CYCLISTS DISMOUNT sign use. Bah. 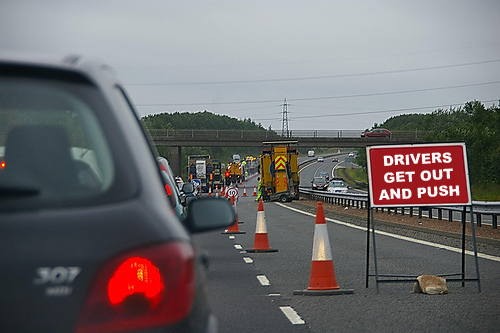 Anyhoo, back to your heavy festive drinking one and all. Peace out to all mankind and boo to Christmas.

A very happy New Year to cycling or non cycling gobs one and all! Bike Gob loves to jump on the bandwagon so has prepared an end of year awards 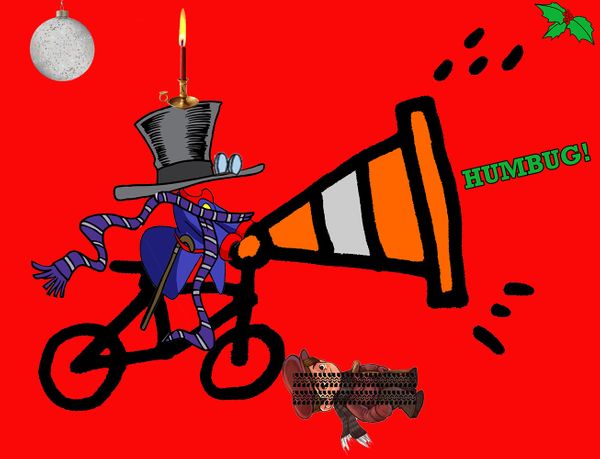