Right gobs, this Thursday the 4th of September is National Cycle to Work Day, so Bike Gob has prepared a useful guide to cycling to work for you to share amongst your colleagues, friends and brethren. Lets get them oan their bikes eh?

In the beginning, when Bike Gob started cycling to work, Bike Gob's life was changed and the word became Gob. Gob felt happier, fitter, had more energy, more ideas, and was able to eat even more pizza than before. And lo it was good. So Bike Gob started preaching the word of the Gob to Gob's colleagues, for they too could become fitter, happier, and more productive. But Gob found that there were excuses, lo so many excuses. Gob knows that cycling to work can't work for every gob, but for those it can, Gob hopes the word of Gob can help. Lo:

Gob accepts that this is a pretty big barrier to cycling to work yes, but one that can be remedied cheaply and with much shopping fun, praise be to Gob. Start with a second hand cheapo out of those gumtree or ebay shops or feel good about your charitable self with one from the Common Wheel for it is good. Once you know more about what kind of bike you want, and fancy something um fancy, sign up to your work's Cycle to Work scheme and make top drawer tax free savings. It's Asda price.

Excuse 2. But I'll be too tired at work.

Yup, the first day you will feel pretty knackered when you rock up to the entrance and thy face will be red. But shove a banana in your gob and you'll recover quickly. The next day thy behind will throb but you'll feel better than you had if you'd sat on a crowded bus with your face in someone elses armpit. The next day thee will feel like it is getting easier and the bit when you zoomed past your colleagues sitting nose to tail in traffic will stick in your head. Every day after that you will feel amazing all day forever after and you only spent three days getting there. Build up your cycling a few days a week at first and thee will feel good said He.

Excuse 3. But I don't want to look like a twat.

You mean you don't want to wear lycra right? Bike Gob is not necessarily saying that people who cycle to work in lycra look like twats but well you know... journeys under 10 miles can easily be done in your normal clothes. For chaffing issues, cycling shorts under jeans are the way forward in Bike Gob's opinion, for they shall be hidden and good. Just look at how much these people such as Bike Gob's new twitter best friend Patrick Harvie don't look like a twat.

But then again, in some cases, you may have a point...

Excuse 4. But cycling on the roads is frightening.

Yes, despite the heavens above, for new cyclists this can be true at times, which is why loads of busy gobs are hassling the gobs at be to make this better. But in the mean time, it is possible to get around the majority of Glasgow on cycle paths or quieter back roads. We have our canal paths and the NCN 75 route along the Clyde both running right through the city. Hallelujah! Plan your route ahead of time using online tools like the amazing Cyclestreets or Ride with GPS (use the OSM Cycle Map to find the bike paths) or pick up a free copy of the Glasgow Cycle Map from The Bike Station for it is good. We might have to go a little futher just now but one day, if Bike Gob has anything to do with it, this will get better. 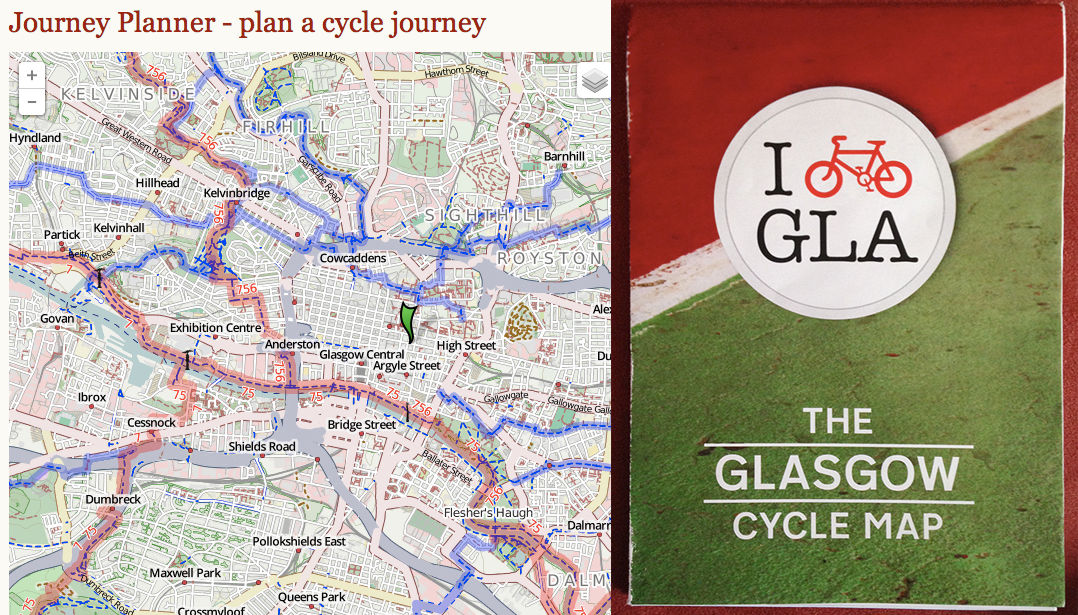 Thee probably already do. Och now, Bike Gob is only joshing with you. Take a spare shirt with you. And deoderant. They don't weigh much. Some cycle friendly employers even have showers if you're lucky.

So break up thy journey. Pile your bike in the car, drive part of the way and cycle the rest. Take the train part of the way. Yes, you're allowed to take your bike on the train. Leave half an hour earlier for a quieter train and you'll save your money for cake and/or pizza when you get to work.

Excuse 7. But I don't want to be late if I get a puncture.

Thy have been late before! Trains run late, motorways get held up, cars get flat tyres. Use the same procedure. Plus your local friendly Bike Station do super cheap Fix Your Own bike workshops. And changing punctures is fun when you know how. Bike Gob knows this for Bike Gob is the third fastest puncture changer in the whole of the land. Of Glasgow. On one day in June.

Excuse 8. But I dont want to get wet.

Waterproofs are cheap and skin is waterproof, and when Gob decides it must rain it shall be good. Look out for flash sales on cycling stuff at Lidl and Aldi. Get in there quick and you can pick up a waterproof jacket and over trousers for less than a weeks bus pass.

Excuse 9. But I can't face exercise first thing in the morning.

Don't question it - on the first pedal revolution you've forgotten all about it. Don't look out the window when you get up and think, it might rain later maybe I wont cycle, because if that doubt is in your head you won't. Motivate yourself by seeing how much faster you are getting and compare your rides with your friends with an app like Strava. You might even get a nod from Bike Gob on there and then you have maximum qudos and rule the office and all the land praise be to Gob.

Excuse 10. But I have too much to carry.

Bike Gob agrees that this is a legitimate excuse in many cases and even uses it on extreme occasions but is hoping to get a cargo bike one day. For small loads though, thon messenger bags (buy locally from Trakke and feel environmentally smug) and panniers are the way forward. Or piano trailers.

So there you have it. No more excuses gobs. Pass this on to your colleagues and soon enough Bike Gob will need to write a chapter and verse about how to get your colleagues to stop being smug self-righteous office cycling bores.

For more info on cycling to work check out the A Better Way to Work for employees and employers alike. For it is good. 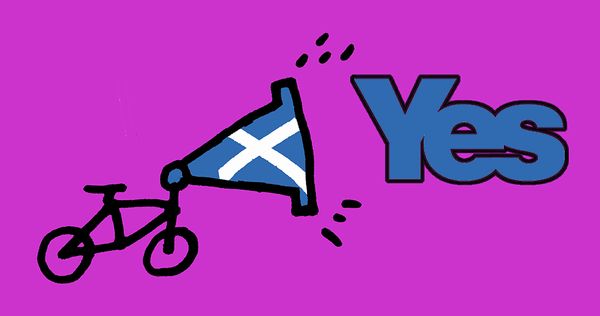 And what exactly does the independence referendum have to do with Bike Gob I hear you ask? Because Bike Gob wants everyone to know. This is important. This is big.