Calm down, calm down for goodness sakes, Twip Twats part two is upon you. Get your scissors at the ready:

If you've never encountered one on the road you will most definitely recognise the Short Distance Lycra Wearer (SDLW) most days at the work, as this common twit spends more time parading around the open plan office in lycra than they do on their actual bike. The SDLW also spends more time getting ready to ride to work, than their actual trip takes, piling on every unnecessary piece of gear they have, filling up water bottles, and ensuring plenty of sporty as hell gels are sticking out their back pockets just enough to invite questions.

Thought to have evolved from the part time club racer or short term long distance rider, this twat desperately needs everyone to know that they are a “cyclist” and will commonly hold impromptu office catch ups, pre-change, standing hands on hips, while work gobs uncomfortably look anywhere but at the shorts bulge. Talking of which, as this twat doesn't ride far, he/she doesn't see the need to wash their commuting kit, the offending chamois causing a high fume rating both on and off the road.

The SDLW rarely causes trip danger, as they are rarely in the trip danger zone, but they are an extreme annoyance. Ignoring the twat will only cause them to lay on more lycra until you do finally ask, “oh did you cycle here?”, causing them to gratefully regale you with information about their current shifter levers and tales of the time they made it up the Crow Road in Partick. This can cause death by boredom so Bike Gob suggests that the best approach with the SDLW is to ask them for assistance with mending your fictional puncture. They will immediately remember some fictional deadline and you won't see them again lest their lack of practical ability show them up for the SDLW that they are. 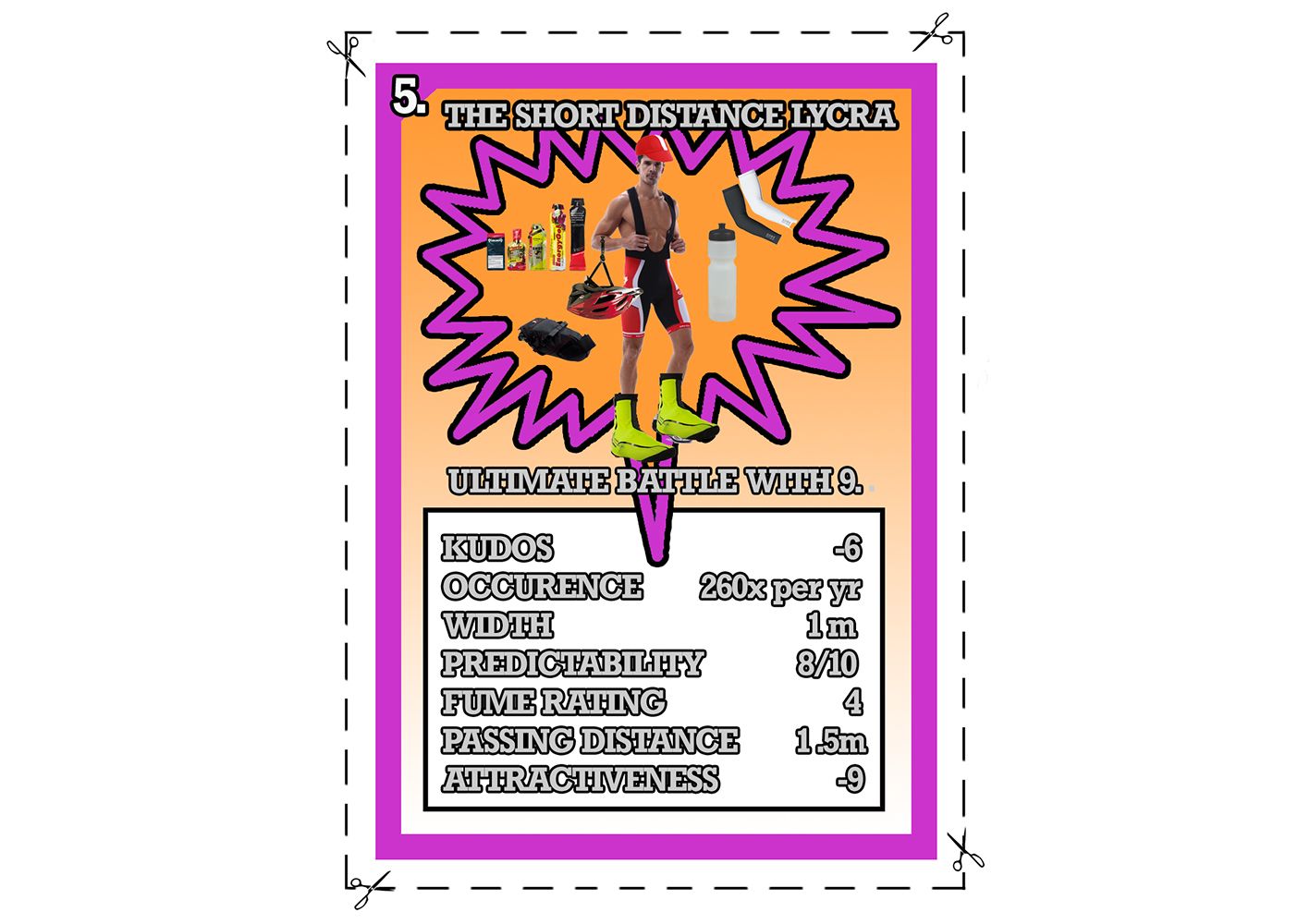 Due to having never seen an off-road muddy track in their puff, the terribly clean West End Tractor is a sadly common sighting around the tarmac'd roads of the city, gleaming resplendent in their pointlessly pollutive vastness. Gobs will be well accustomed to the sound of the approaching jet engine, as variably either an overly made-up school run mother or a young lad thinking himself the next Tupac Shakur, approach on their short but high carbon emission journeys in the most twatish of vehicles.

No driver of the West End Tractor has ever seen all the way from the driveside to the nearside width of their twat-mobile, their behaviour demonstrating a gap in the knowledge where the knowledge of car width should be. The sheer height of the vehicle further prevents any trip gobs from being seen by the twats, and so the best remedy to the aforementioned approach of the jet engine warning signal is to abandon hope and scatter from the road until the ridiculously selfish poser wagon has passed. 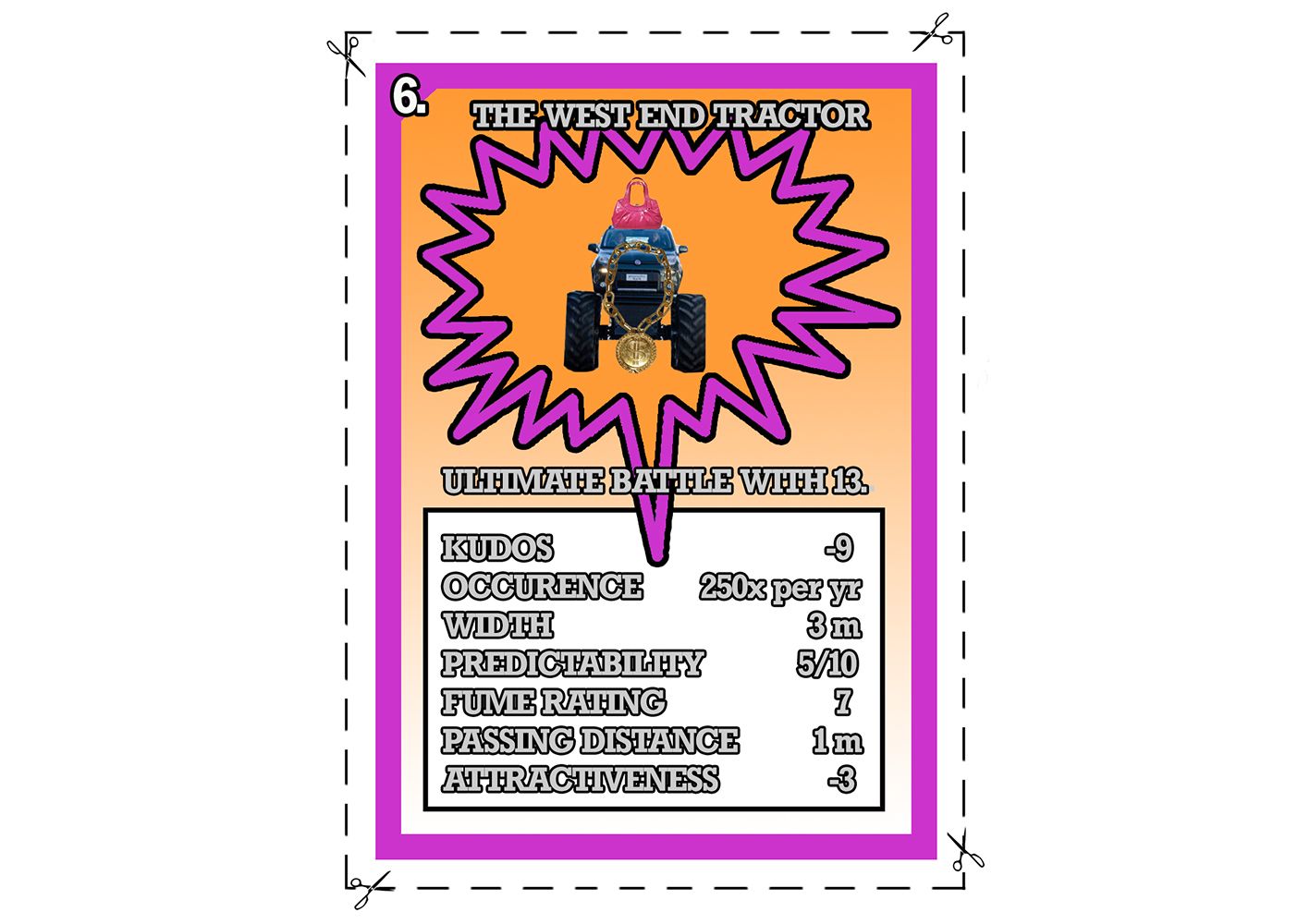 In it's many guises The Council is recognisable by it's recurring recognisable shade of green and 1970's badge of honour. As well as their familiar close passes, these twats appear well versed in what may be a part of the fully rounded council training program - gob spraying. The smallest street cleaners spray street juice, the parks vans spray gardening equipment (flying brooms, escaped lawn-mowers and the like), the bin lorries spray bin juice (obviously), while the gritters um, spray grit.

The worst of all Councils a trip gob can encounter are those really really long LES lorry looking ones on Bike Gob's commute that thunder along Garscube Road during rush hour. You know, the ones that inexplicably have DO NOT PUSH signs on the back. Ah, the council, a sign for everything eh, keeping us right. Oh, except the badly signed bike paths. Aaaaaanyway, Bike Gob wrote the really really long lorry twats boss a letter one time to ask why they appear to have a blind spot for Bike Gob, never slowing down or changing lanes to overtake, and asked the power gob if the council have any cyclist awareness driver training in place. The boss guy said no they don't but it is something they will “discuss with the training provider”. But this confused Bike Gob a bit because in the consultation draft for the councils revised Strategic Plan for Cycling the twats state that “we will continue to organise taxi, HGV and bus awareness courses for both cyclists and the drivers of these vehicles” which suggests that they already do this. Ah the council eh, always truthful and transparent, and leading by example and never one for the marketing ploy. Pffft. This is one thing that BG will be bringing up in BG's reply to this consultation and BG urges all you gobs to put in your pennies worth too. Here. 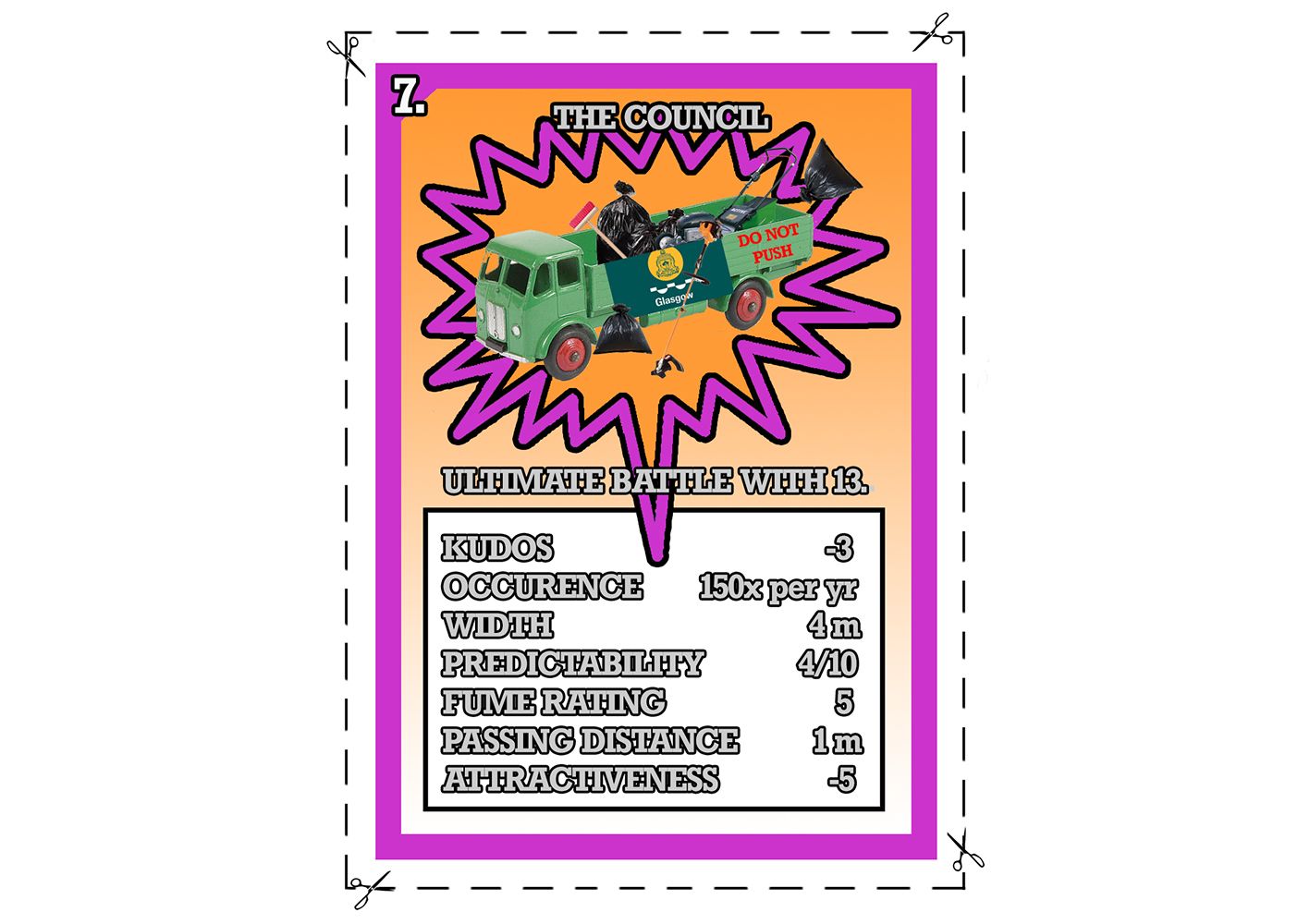 Another twat represented across sub-species on Glasgow's roads is the all round gob's favourite, The Taxi. Woo hoo for The Taxi! Transporting money gobs around in style, burning more fuel than the rest of the cars, but better – they get their own lane! Divided into two breeds, the petrol and the diesel, the Petrol Taxi is a common trip share, often camouflaged as a regular Car until the close pass reveals the 1970s licence sticker on the nearside door, while the lesser-spotted Diesel Taxi can be distinguished by it's black plumage and rattle of poor suspension.

Being that the Taxi driving twats spend most of every day behind the wheel, the trip gob may assume that The Taxi is highly skilled in the behaviour of driving and sharing the road. But no, many Taxi drivers have either never learnt or spent too long chasing the meter to share the road or demonstrate the correct overtaking manoeuvre. Don't get Bike Gob wrong, some Taxi's are exemplary and gob's should reward these endangered species with thumbs up and smiles but the rest of them who's plate and registration number is recalled can be reported here 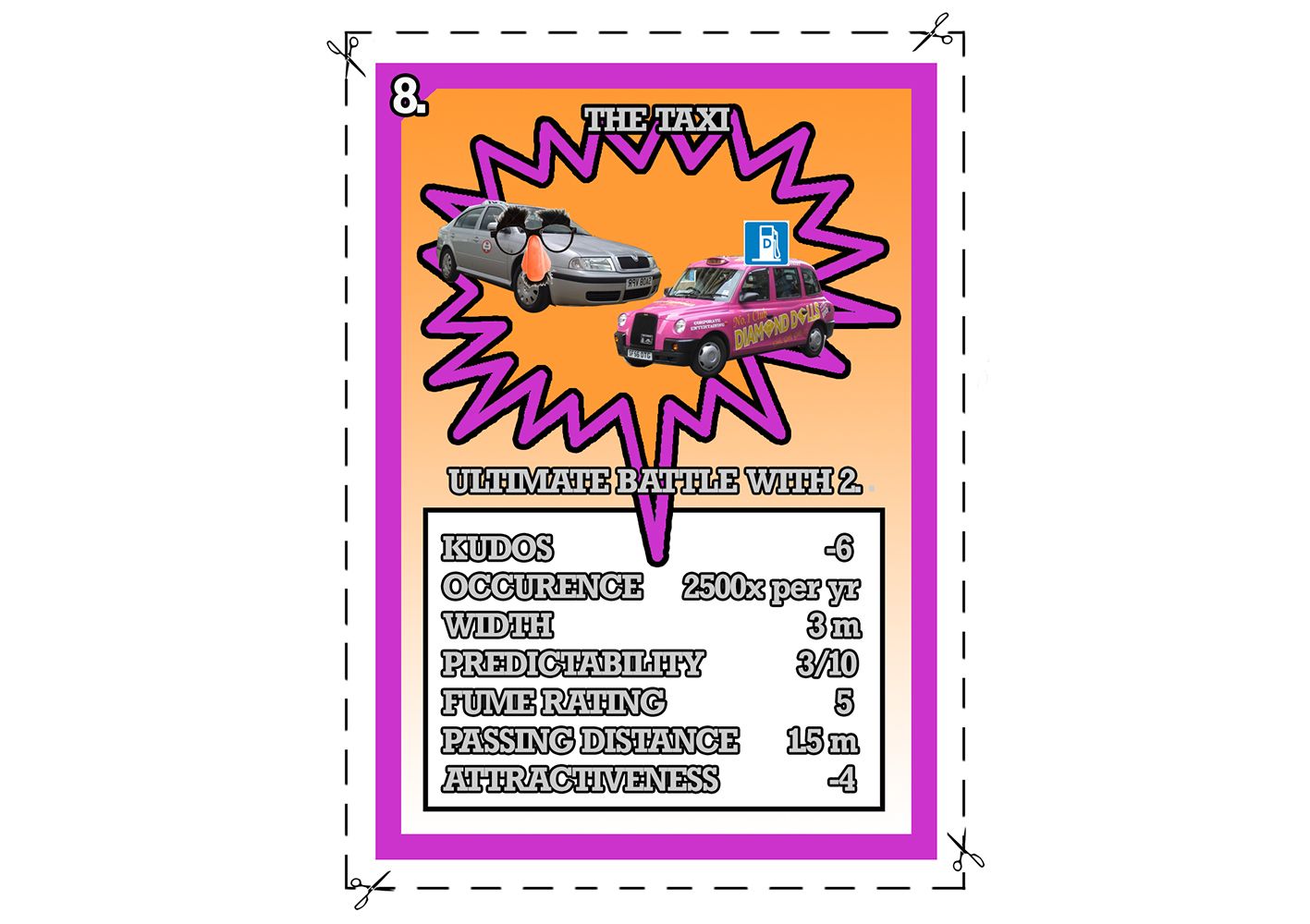 Trip Twats (TM) is a four part serial Bike Gob bike game. If you're late to the party chill your boots, Part One is here and Part Three is at this bit, and if you were to click this next blue thing you shall probably find Part Four.

Bike Gob's popular Twit Twats competition is still open. Tell your friends about Trip Twats. Share it on facebook or twit it on twitter and you will be entered into Bike Gob's competition to win a non bike, no accessories to go with it and a two week trip to nowhere!!! Pass it on to win!!! 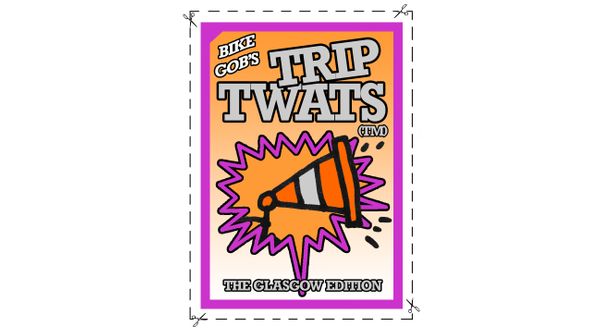 Hip hip hurray! The sun is out, it's taps aff time and with more cyclists on the road and Bike Week just around the corner it can only mean that