Hip hip hurray! The sun is out, it's taps aff time and with more cyclists on the road and Bike Week just around the corner it can only mean that it's time again for yet another of Bike Gob's famous, awesome and ever popular, cut-out-and-keep, do-it-yourself, cheap-as-chips but not cheap on the fun, games. Oooh yeah - Bike Gob knows you dig it!!

Last years' Berkeley Street Boardgame (TM) was such a smash that this year Bike Gob is bringing you a four part serialisation of a card game, with the final set released at the end of Bike Week. This will allow Gob fans far and wide to gather around their fold up pannier rack picnic tables on this exciting day, and have a right good and proper "twatoff".

It is widely agreed around the world that every bike ride is an orgasmic joy. However in a city like Glasgow, this joy can be temporarily tempered by encounters with those whom Bike Gob likes to think of as "Trip Twats". Bike Gob is sure that you will have met at least some of them too and so to find out who are the worst of all the Trip Twats in the land, join Bike Gob in a game of ummmmm..... let's see now..... it's..... Trip Twats. Here are the rules: 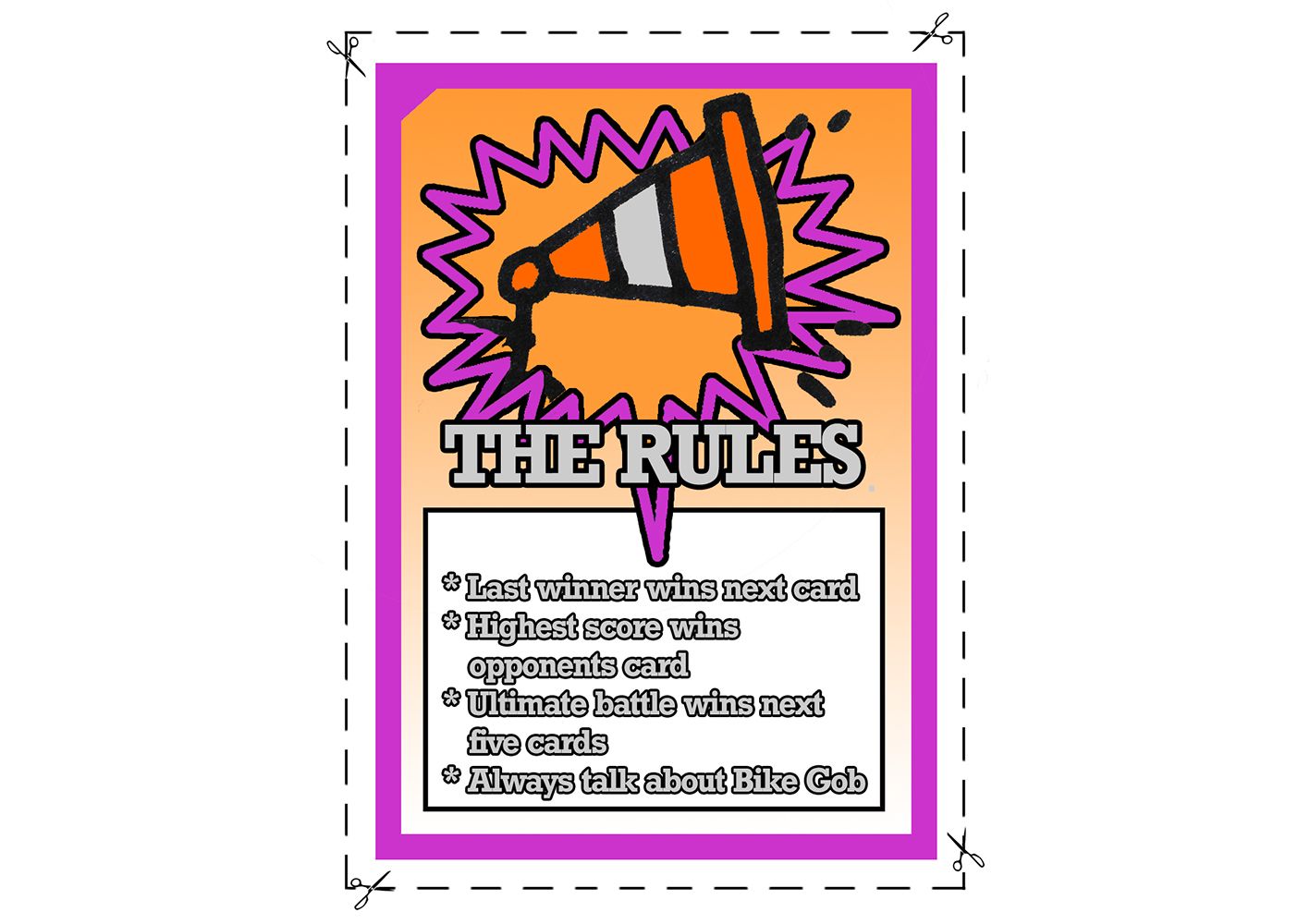 Bike Gob is all for new people taking up riding bikes, oh yes, but it is sometimes up to the experienced gob to demonstrate what is unreasonable behaviour by showing the fledglings how it should be done. Spotted only during the months of May to August, and only when it's dry, the Newbie Street Racer (NSR) will be first encountered at traffic lights, rolling ahead of waiting gobs, then spinning off in front as the lights change, the pace of the legs in no way matching the actual trajectory pace of this particular trip twat.

Other than the failure to grasp the queueing concept, the overriding character trait of the NSR is self-denial. As he or she mistakenly believes themself to be a professional cyclist, they will usually be seen sporting trainers, baggy shorts, a high-vis vest and obviously, a helmet, for that is what they believe is the professional way. This specimen is often seen with the saddle so low that the needlessly overtaken gob will be treated to an eye-full of the trip twats overhanging bum cakes or if lucky, so high that the bike must have been stolen. Unlucky for one. The Newbie Street Racer will take umbrage when he/she is inevitable re-overtaken and will react by attempting to catch up and make a more dangerous pass than the first one. This may or may not be by running some red lights, the narrow misses going unnoticed as the twat sees only the important goal of showing the other gob that he is actually faster, because that is the most important thing, more important than breathing and than not lying under a car with only half a leg left and one eye hanging out kind of squished because a tyre ran over it (for he/she is wearing a helmet, so that won't happen).

Decent gobs will gain gratifying encounters when overtaken by a Newbie Street Racer on a long straight, sneeringly tucking in to wheel-suck while watching the fitness levels of the twat overcome their bravado as they realise that they can't hold their pace. NSR's should be dealt with in this way, passing the twat after the short time it takes for them to fade, with a sprightly kick of the pedals and a friendly and in no way sarcastic thumbs up. 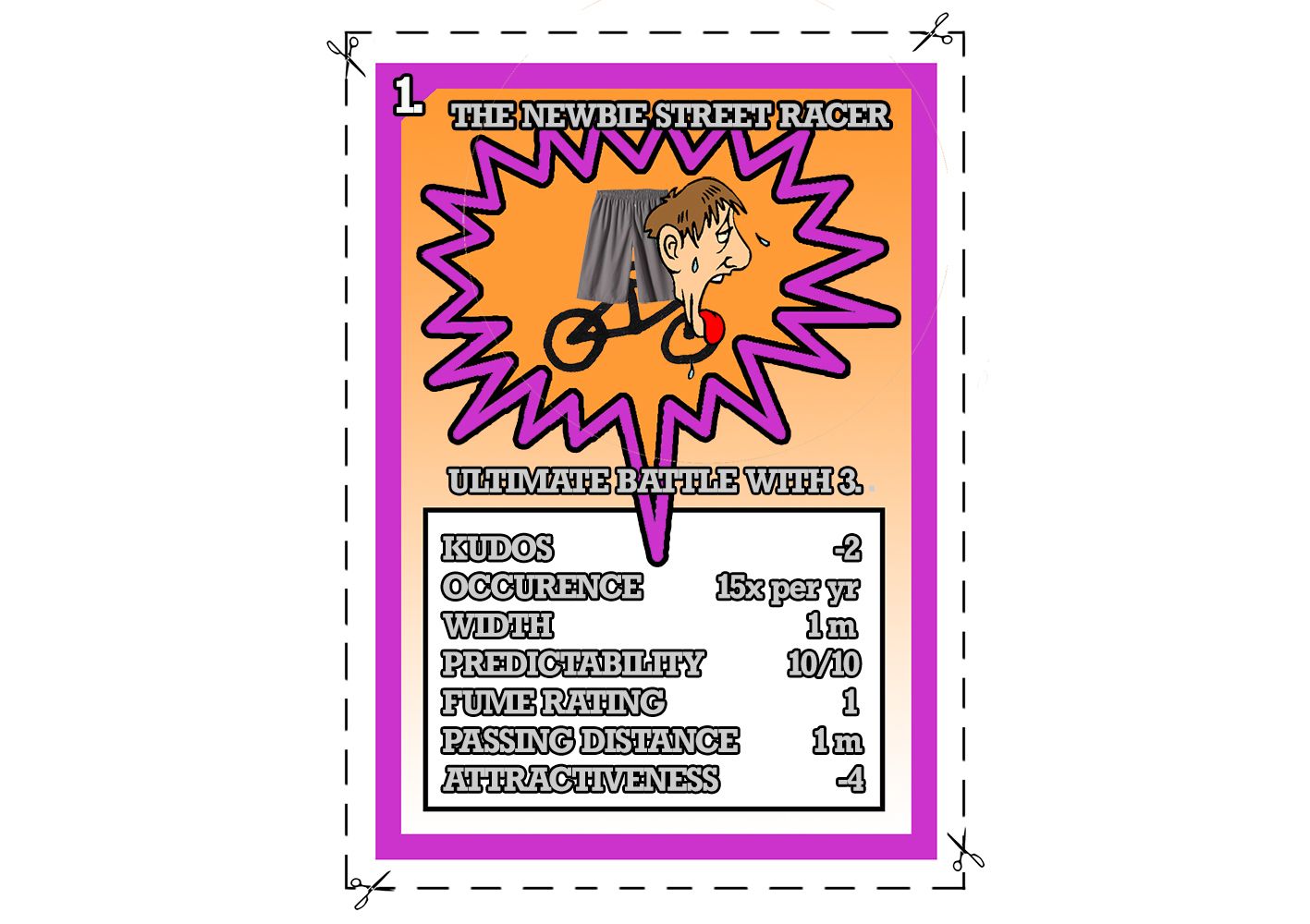 The arch nemesis of every gob on the road is hands down without a doubt, no contest, in Bike Gob's opinion, The BMW. Believing themselves to be the owner of the road because they spent more money on their transportation than everyone else in the whole world ever, the twattiest of the twats, the cockiest of the cocks, the Bampot Muppet Winkle, The BMW will share their lane with no gob.

Whether from the sub-species of The BMW Filtering Preventerer, The BMW Daddy Hasn't Taught Me To Drive Yet, The BMW Road Tax Misinterpretation Pointmaker or The BMW Just An Ass Hat In General, The BMW will display poor and aggressive driving skills on every occasion a gob sees them, the ironic thing being that there is nothing these twats love more than the actual BMW's that they are driving far too close to you. So close that you might actually touch The BMW. On occasions that these dangerous passes do not result in collision, for may those occasions be always, amen, far be it for Bike Gob to suggest that in such close proximity, a scratchy metal zip on your jacket might scrape along the precious expensive paint, or perhaps that time you were riding through the forest last night on your road bike, a really sharp stick might have got stuck in your saddle and it just so happened to make a line across the twats window, or if maybe a big spikey drawing pin bigger than most drawing pins, a lot bigger, might have got wedged in your right side pedal because you were on your way home from the Big Drawing Pins Museum and it's a shame because it caused The BMW to get a flat tyre. No, far be it for Bike Gob to suggest a thing like that. 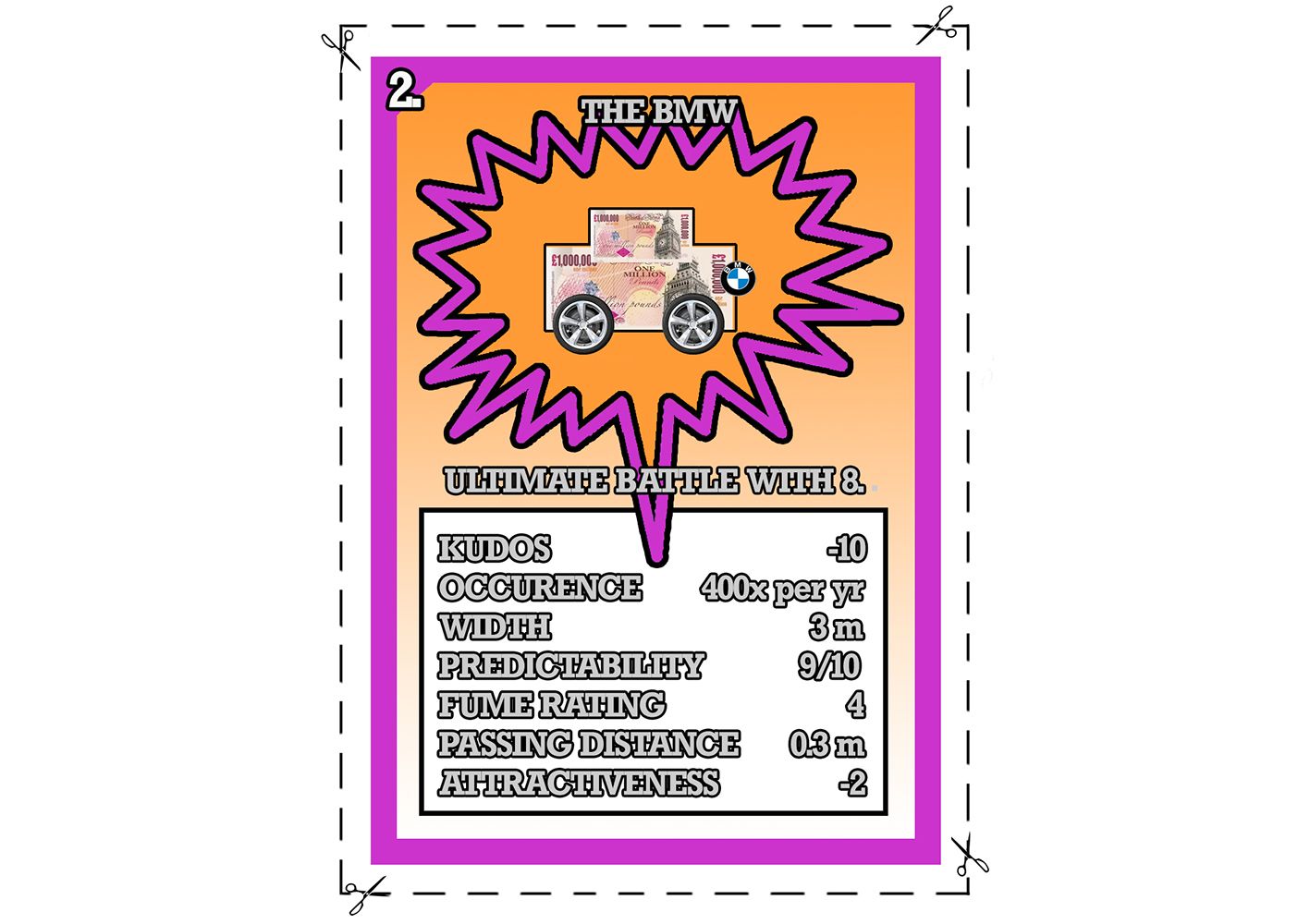 The lesser spotted Crutchwaver is a prize tick on the sheet of the gobithologist, as they are rarely to be found far from their natural habitat of the bus stops of Maryhill Road or the environs of Sunny Govan. Not always to be found on the road as such, rather protruding onto the path of gobs on the road, the curious behaviour of this particular twat centers around standing, sitting, shouting and spitting in a bus stop for impressively prolonged periods of time. Which bus they are awaiting is known not even to the Crutchwaver.

Gobs will be most familiar with this species when the twat mistakenly identifies an Arnold Clark van for the Number 20 and in the most swift and energetic move in their repertoire, thrusts the crutch they had been wavering on for the last couple of hours, into the path of the oncoming gob. These twats are best dealt with by performing the bicycular limbo and/or the far off spot and anticipatory avoidance manoeuvre. Do gooder gobs with some time on their hands can help tempt Crutchwavers away from the trip path by the means of cigarettes dropped like Hansel and Gretel breadcrumbs, leading towards the local post office, pharmacy or bookmaker. 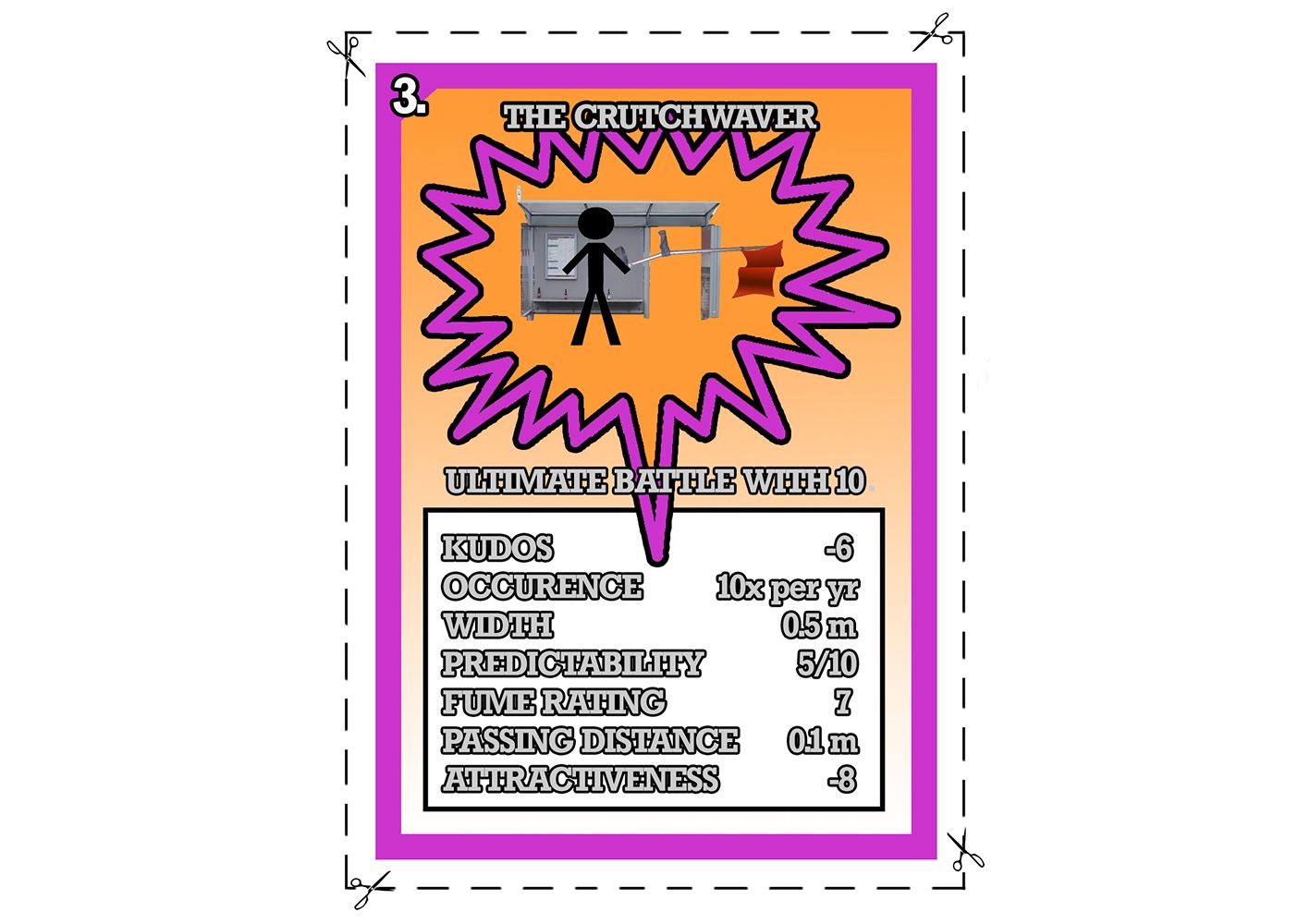 The odour of The Public Bus is usually noticed before it's sight or sound although these are both also not to be sniffed at. Possibly the most common spotting around Glasgow, these twats are necessary and important vehicles on our roads, but definitely not an easy trip share for gobs. The Public Bus can sometimes be observed engaging in the twatish behaviour of driving up gobs arses, forcing gobs into maximum puff out effort, with an ensuing close pass despite the gobs necessarily adopted primary position. Those gobs taking on the leap frog challenge from here can be encouraged and delighted by staring out the sweaty jealous faces of those inside the only marginally less awfully smelling interior, although drivers of the rarer Lesser Spotted Diddy Bus, who stop to go to the shop for crisps and irn-bru, can put an early end to this most enjoyable of races. 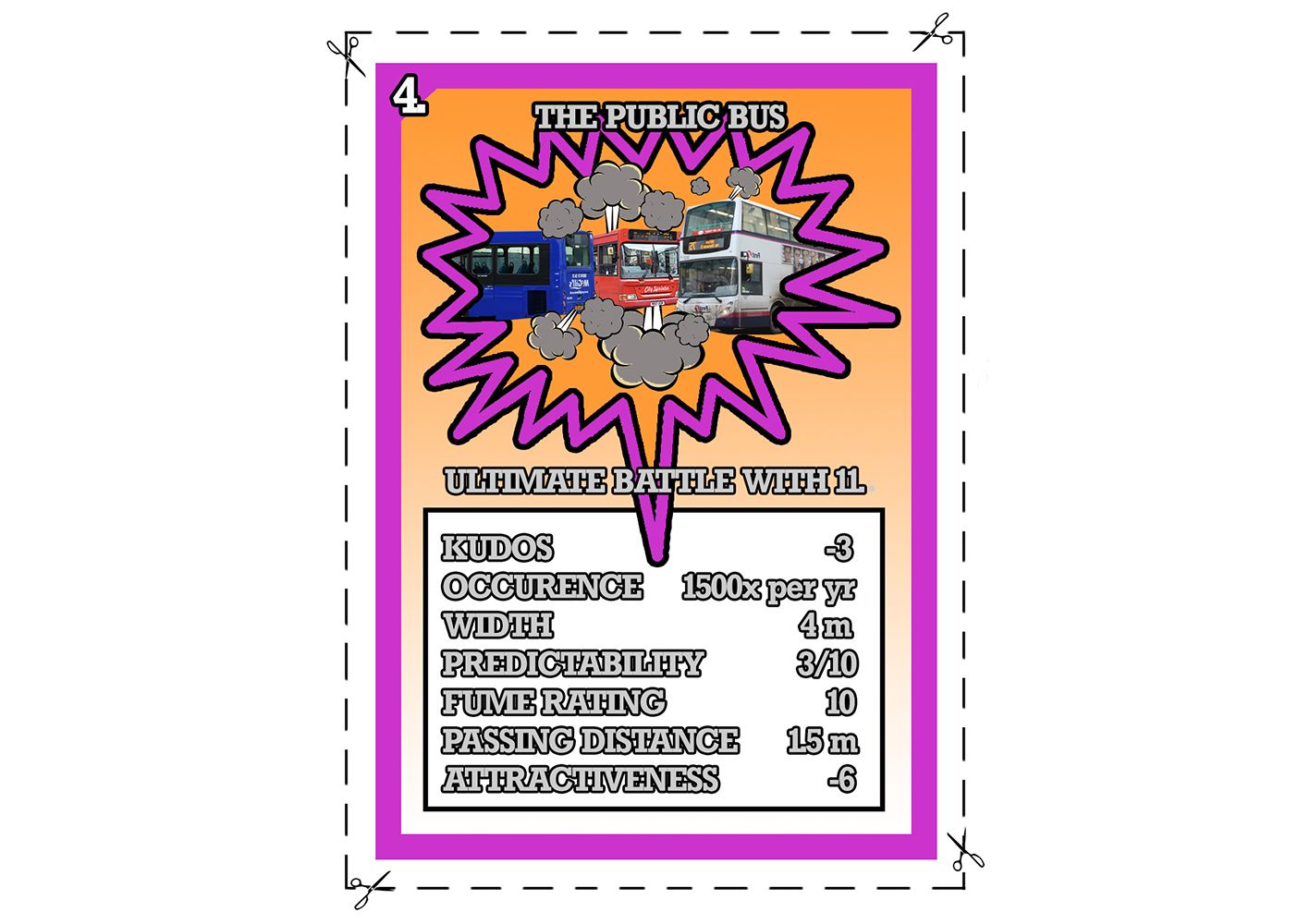 So there you have your first instalment. Print them out, cut them out and look out over the next week for the next three instalments to add to your pack. Tell your friends about Trip Twats. Share it on facebook or twit it on twitter and you will be entered into Bike Gob's competition to win a non bike, no accessories to go with it and a two week trip to nowhere!!! Pass it on to win!!!

Oh and also you can find out everything that is happening in Glasgow during Bike Week here.

Trip Twats (TM) is a four part serial Bike Gob bike game. You know you want the rest so check it: Part Two be at this place Part Three is here and and if you were to click this bit you shall probably find Part Four.

Calm down, calm down for goodness sakes, Twip Twats part two is upon you. Get your scissors at the ready: 5. The Short Distance Lycra Wearer If you've never encountered 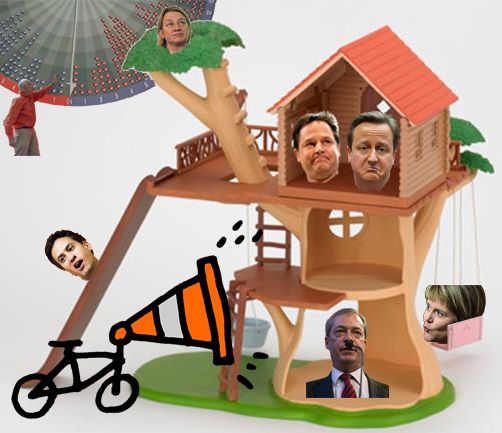 Yeah so apparently this Thursday we all get to vote on an important decision, did you know this?! Bike Gob noticed as there had been a couple of things about