Time was tight, so cycling there wasn't an option and Bike Gob reluctantly purchased a ticket for the Gold Bus, essentially the Megabus with bigger seats, a stale scone, and coffee that tastes like the water that runs off the top of the bus when it's raining, collected in a bowl and heated just below boiling point in a pigeon urn. Although Bike Gob's battery had died on Bike Gob's mp3 player equivalent of an ipod, Bike Gob put Bike Gob's earphones in anyway to avoid talking about the scones and how many times gobs make this journey, and Bike Gob survived.

Bike Gob had heard a lot about a place for bike gobs rocking the northern city called the Velocity Cafe and Bicycle Workshop and so went to make a gobbing visit. This is what Bike Gob found. 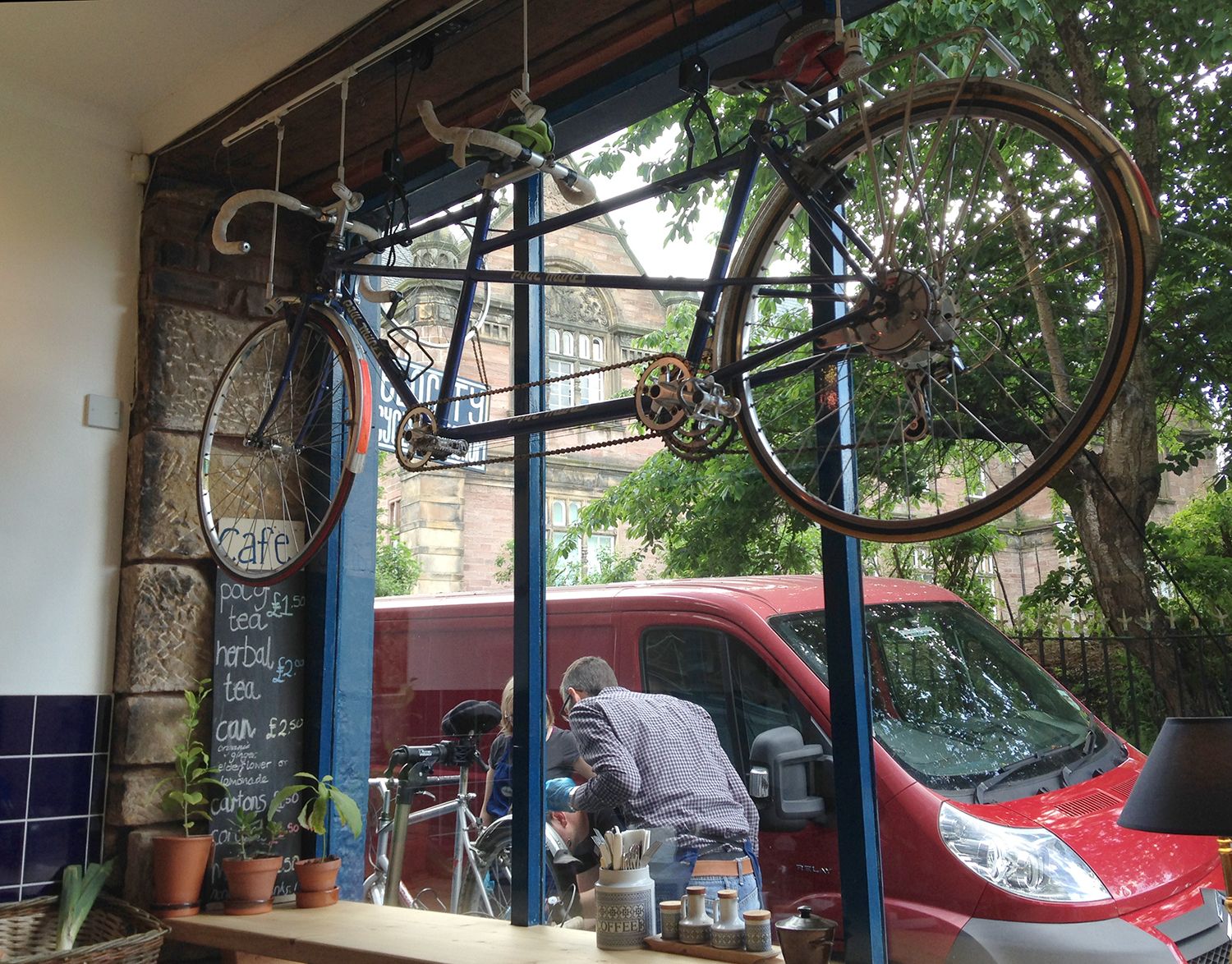 A social enterprise run by bike gobs for bike gobs and budding bike gobs, Velocity was a world of bicycle heaven. In the cafe, gobs have information noticeboards on local bike stuff, cycling books for sale, a map for route planning and bike path development gobs and obviously non Gold Bus coffee, local food and mega cakes. A host of events happen in here too from film screenings to beer tasting to ukelele sessions (for gobbing serious).

Through the back in the workshop area there were gobs being shown how to fix their bikes, gobs there to fix bikes for you, and gobs working on outreach work and they even loan out Paper Bikes! Bike Gob was told that Velocity is very much about the community spirit of the bike gobs and Bike Gob could see this in abundance. On account of Bike Gob's Gold Bus scenario, Gob was sad to be unable to join a social ride leaving later that day.

Bike Gob sat in the middle of all this wonderfulness, had a very decent coffee and heard the Hallelujah Chorus playing in Bike Gob's ears. Not because it was Sunday, but because other gobs doing such brilliant stuff for cycling made Gob happy.

If you need rubber bumpers and are heading to The Inverschnecky, do go and check out this place and you too will have the Hallelujah Chorus playing in your ears. More information on Velocity is here, including all the cool stuff they're doing for Bike Week. Bike Gob wants to do a bike quiz. Bike Gob would totally win.

Bike Gob leaves you until your next Bike Week adventure with this stunning film courtesy of the Velocity gobs.

You may have been completely unaware that Bike Gob has been a bit quiet of late. Bike Gob wishes to apologise even to those who hadn't noticed, but does have

Bike Gob is excited. Bike Gob feels like the wind has changed direction. Finally, Glasgow is joining the ranks of forward thinking cities like London, New York and Barcelona, and