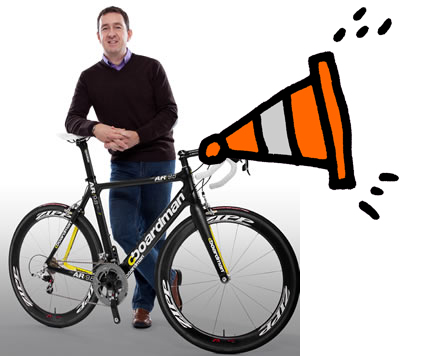 Bike Gob's heart was warmed and toe clips excited yesterday by some promising announcements by the people on high regarding a doubling of the active travel budget, as well as the opening of a post of "Active Nation Commissioner"** for Scotland. Wit wooooo!!

So clearly with that in mind, Bike Gob would just like to put it out there that BG is currently actively seeking employment. This Gob is an effective communicator (it's in the name), and is a thoroughly courteous team player. Gob never spits when riding in a group and is always good enough to not hog a go at the front. Being a wholly motivated individual (mainly by anger, potholes, taxis and tzars), Bike Gob would probably be perfect for the role, presumably shortly to be advertised.

Gob holds a wealth of relevant experience due to being big pals with Big Franky McAveeto, so if BG gets stuck with any questions when doing the job, Franko is just on the other end of the blower. He'll know what to do. Bike Gob has memorised Frank's "310kms of cycle lane in Glasgow" statistic and also has a poster of Chris Boardman in the shed. BG has lots of books that include 'Roads Were Not Built for Cars', 'Bike Nation', and 'Zinn and the Art of Road Bike Maintenance'. BG hasn't finished any of these books as they are quite long and surprisingly lacking in illustrations, but they can easily be referred to at a later date if required. Gob can read though and has finished a signed copy of Nick Cave's The Death of Bunny Munro but quite frankly it was a terrible book. And the Ass Saw the Angel was much better and The Death of Bunny Munro was just monstrous for monstrositys sake, but it's signed so BG will have to keep it. For proof of all statements please find Bike Gob's photo CV attached above of a photo of BG hanging with BG's bestie Chris Boardman. Please find also attached, evidence of referees:

Bike Gob hasn't seen the salary advertised with the post of Active Nation Commissioner yet, but is sure that a suitable agreement can be reached, as there will bound to be some room for manoeuvre in order to get the right man/woman/person on a bike for the job in place. And we all know who that is. Don't we Humzah. Wink. Hi. Over here.... Ahem...... Helllloooohoooo.... PICK ME!

And by the way, a very very big thank you to the people in power who listened to the repeated pleas of gobs around the nation asking for these extra funds. We warmly welcome your moves in the right direction. Yes, it's still only 3% of the total transport budget, and yes, we are still concerned on how it will be spent, but BG feels sure this is the first in a series of moves in the right direction. Thank you power gobs.

And massive special thanks to the cycling campaigning gobs who tirelessly asked for this year after year. This one is down to you lot. You rock. Oceans of thank you. LONG LIVE THE BIKE!!!!

** Active Nation Commissioner - good name by the way. BG wonders if whoever came up with it might have been in receipt of a rogue posting of Peter Walker's Bike Nation book from Pedal on Parliament. Eh eh?