Bike Gob here - did you miss me....? Hey so big congratulations on your newish post as LEADER OF THE COONCIL - oh my, that is a biggie, how did that happen (again) eh eh wink!!?

Anyway, let's get straight down to business Frankie Boy, Bike Gob saw you on the telly last night, on STV News, talking about cycling! Nice jumper Frank! It's good to see that you are still representing the council on the cycling front - BG wasn't sure if you were still the "cycling tsar" or not but if you're on the news you must be the guy!

So Bike Gob thought it was a great report - the Cook brothers made some good points, Cook Brother One falling off his bike at one point and saying "joined up thinking" was great, and then Cook Brother Two nearly got hit by a car and showed us a terrible bike lane in the door zone - you wouldn't get Bike Gob riding in the door zone NOT EVEN IF YOU PAID BIKE GOB!!! The posh lady and the taxi driver (er.. ahem?!) obviously think that no cars ever jump lights or speed and if they do then that must mean that all cars must do it or something. The interviewing man looked a little wobbly there but maybe that was because he was about to ask you a hard hitting question.

But sadly while watching this wonderful report, one thing made Bike Gob's foot slide off the pedal and whack it into Bike Gob's shin, and that is why BG has swept the rust off of BG's special Frank Pen and is contacting you today Frank. You see, the news report mentioned that the council says that Glasgow's cycle network has increased in the last six years from 80 kms to 310kms. Now come on Frank, we both know that that is total and utter crapenhausen. Frankie Frankie Frankie.... Bike Gob has shared the following information with you before! Don't you remember reading it? It's here!

Back in 2013 when you first ludicrously claimed that there were 301 kms of cycle network in Glasgow, the breakdown went like this:

Now let's stop playing silly sausages Frankie McFrankface, you know that a bus lane isn't a cycle path!! A normal road with a sign post isn't a cycle path either Macca Frankington!! And let's be honest here, cycle paths are what make cycle networks now aren't they! These bus lanes and normal roads account for 144.7 kms of your total "network"! In fact the only truly segregated part of the whole cycle network stretched for only 3.3 kms!!! And now, three years later, you've upped your total to 310km - a whole extra 9kms in three years! Franky goes to Hollywood!!!! Oh my gob does Bike Gob not like the overuse of the exclamation mark but Mr Macaveety, you're driving Bike Gob to it!!!!!!

And then my Franky friend, you go on to answer the hard hitting question about the poor safety of the cycle paths by saying that cycling groups are now being consulted. Well Mr Frank are you having a laugh with us or what, because during the consultation for the "cycling plan" you mention (Glasgow's Strategic Plan for Cycling), many many cyclists consulted called you on this 310 kms of cycle network statistic and yet it still ended up in the final plan AND now you mention it again on the bleeding news! Would you Adam and Eve it! Stop using that statistic now please for cripes sake, put your soundbites down and please get down on with the business of doing some actual work to improve things for us.

Remember two years ago when Bike Gob sent you this video? You promised that you'd pass it on to the Land and Environmental Services to department to deal with. Did you follow it up? OBVIOUSLY NOT FRANKENFURTER! All the same potholes are still there, there are no more signs in place, and the route still looks exactly the same! The only change to the cycle network we have seen in the last two whole years is one wee section of segregated path near Shields Road which is nice if you can get into it without being hit by a car and stretches hardly a km! In TWO YEARS!!! It looks to Bike Gob that you are spending all this £15 million you claim to be investing in cycling on apps that don't work and on patronising and down-right offensive adverts telling elderly people that they are too dumb to know how to cross the road. Come on Frank. Let's be frank, Frank. Bike Gob knows that you can do better.

So that's Bike Gob's rant over - but hey Francis, listen up, here is Bike Gob's question that requires an answer Mr Mcaveety. Now that you're talking again as the councils cycling representative, will you please stand by your promise to listen to cyclists by attending Pedal on Parliament this coming Saturday (23rd April 2016 12 noon at The Meadows, Edinburgh, East of Glasgow, directions are here Frank in case you can't find it)? You've had decent excuses all of the last four times but will you have an excuse this FIFTH time? Come on on Frank. Come and hear what cyclists really want this Saturday. COME TO PEDAL ON PARLIAMENT. Will you?

Much love as always

P.S. All you other gobs, please also come to Pedal on Parliament. Pleeeeeeeeease.

Hurray for Bike Gob's new big pal Councillor Matt Kerr! While Frank has been too busy retweeting tweets about Glasgow being the worlds 5th top sports city(???!!!) to reply to Bike Gob, it appears that after a spot of annoying nudging, he has delegated the task of coming to listen to us at Pedal on Parliament to fellow councillor Matt Kerr. Praise gob! A sideways victory! Shame on Frank for not standing by the word he gave on the actual telly though.

Come and say hi to Bike Gob on Saturday Matt! If you can find Gob that is ha ha ha ha ha! Och only joking with you! Will you be riding your bike? What's your favourite colour? Do you like crisps? See you soon pal. xx 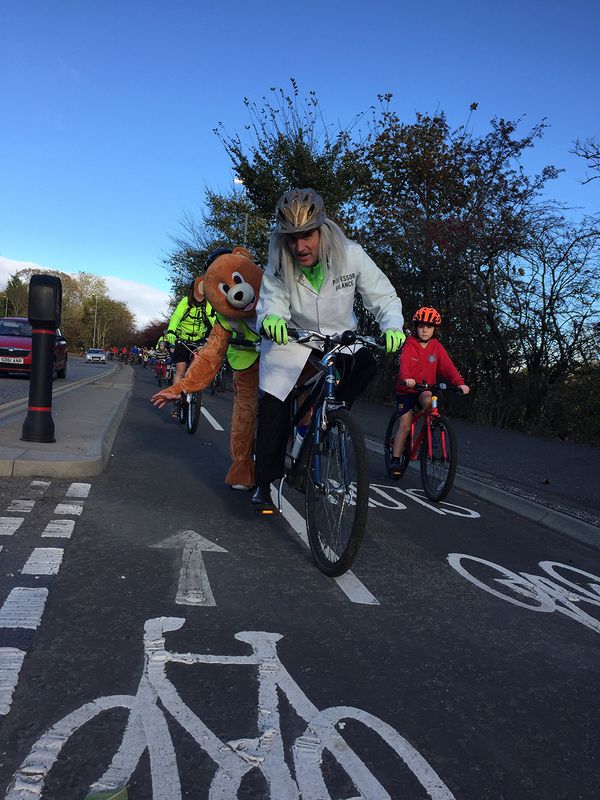 Bike Gob had a dream. Bike Gob went to hell and came back a winner! Bike Gob was so excited about the race today that Bike Gob ate too much