Today hundreds of amazing gobs came out with The Friends of Bearsway to show their support for the Bearsway Cycle Path and to ask that it is extended to make it safe for all the big and little gobs that want to ride safely on our roads.

A few weeks ago local vote seeking councillors voted to deny it's extension despite it only seeking approval for design stage. A few loud shouty people in the area have moaned about having to now be forced to drive at the speed limit, wait a few seconds behind buses, and suggest that cyclists should have to take longer routes around the back streets and forests and railway lines to get to where they are going while only drivers are given the right to travel directly to their destination. WELL THAT'S NOT GOING TO ENCOURAGE PEOPLE TO CYCLE FOR TRANSPORT IS IT???!!! These loud shouty people can't have been in their cars today though because we had hundreds of friendly waves from motorists adding their support.

Plus, one of the main arguments the shouty people against the cycle lane is that hardly anyone uses it. Well OBVIOUSLY IF IT'S INCOMPLETE IT WON'T BE USED BY EVERYONE but today has shown how many people do want to use it when it actually goes somewhere. This is how many people. Many many many many people as far as the eye can see. LOADS OF THEM!!!! Thank you gobs for turning out and being amazing. It put a massive smile on Bike Gob's previously miserable face. Check it: 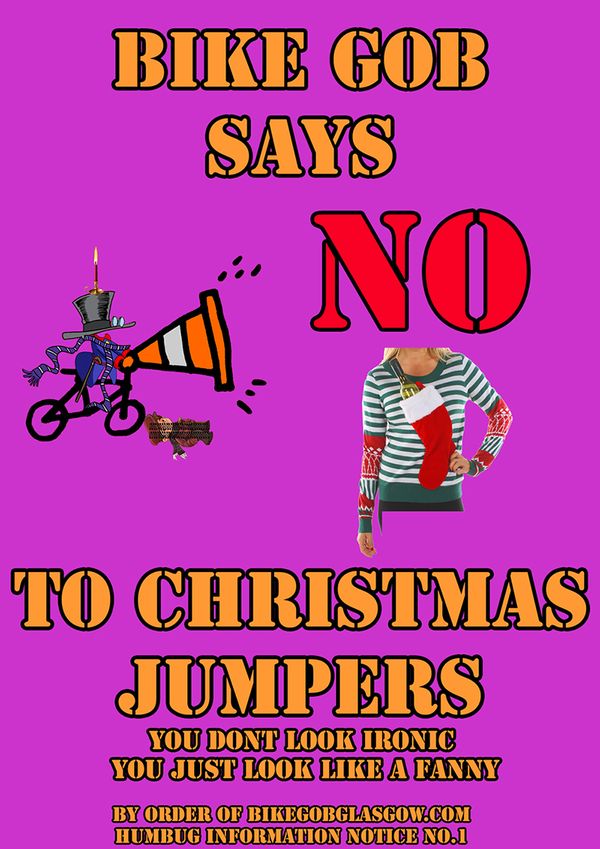 As you all know, Bike Gob hates Christmas. Really really hates it. Except the presents obviously, but Bike Gob really hates everything else. The disgusting christmas pies, the tree murder,