Tantada ta ta ta taaaaaaaa!!!! It's awards time! It's the one you've all been waiting for good gobs! It's long over due, and it's been well over several years since the annual accolade has been passed on but you know it, it's here, today Bike Gob brings you... Bike Gob's Gobble of the Year Award! And this year oh my are you are in for a treat as we don't have just one gob for you, but a double slimy whammy.

Yip! Bike Gob was delighted engraged not surprised in the slightest to see this year that Nigel Farage (of the Daily Mail) has joined Scotland's own Rab McNeil (of The Herald) in engaging in hilarious cycling hatred bants. Now granted, Mr Farage's writing (can you call it that?) was not billed as comedy as such, although his fact averse opinion pish does have as much humour in it as a regular Rab (or is it Robert now) feature. Gob has searched through McNeil's writing with a fine end of a brake cable and has yet to find anything that raises a chuckle, aside from the editor's response to complaints claiming, it's fine, people might use their cars to kill injure or maim people on bikes as a result, but it's just a joke. A sort of Trumpesque locker room banter. "I don't even wait. And when you're a star the editors let you do it. You can say anything".

Gob has long suspected the continued publishing by The Herald of Mr McNeil's comments about "cyclists" indicates a move of the paper towards attracting a Daily Mail readership and this frankly confirms it.

Let us examine the similarities between the bilious brothers in arms. The opening paragraphs from fruity Farage:

Compare and contrast; an early piece from the ruddy "hilarious" Rab:

Wawaweewa. Looks like Farbage has been doing his research on top cycling hate articles to plagiarise there. But don't worry Robbo, they say that imitation is the sincerest form of flattery. And who better to be flattered by than your big racist rightwing tit colleague.

Wee Nige has really done his homework though. You see this early work from "Robert" is actually pretty tame by his own standards. In fact he almost goes far enough to admit that not all cyclists are the same! Fear not however, for Farage has been lucky enough to find that as Racey Rab's sad obsession percolated over the years, his bile worsened.

Rab the Cab is even going as far these days to celebrate injury to people on bikes. Meanwhile, his big pal Nigel J Bilge has taken up Boaby's baseless descriptions of people who use bikes as militant, egotistical and narcissistic and taken things a step further with some less wordy (not sure Nige knows long words) but equally dehumanising language (see self-righteous swarms of insects etc etc blah blah blah).

Big Mummies Boy Nigel hasn't quite caught on yet to Rabbiting on about hell knows what Rab's curious assertion that cyclists are a massive danger to drivists, but he's certainly adopted aping his deep anger expressed at folk who dare to wear sweat and movement specific clothing. Must be shit that, always having to stick to tight fitting tweed trousers or too high waisted jeans that make your knickers go into a sweaty twist when you are held up for five seconds by someone on two wheels during your half mile drive to the off-sales for your six-pack of shit lager/ale. It must get really itchy. Probably rashy too.

Both hateful fake moral high ground twits appear to have also had a conflab over their sexist tendencies to have come to the joint conclusion that all "cyclists" are men. This is odd, as BG sees hunners of women (or burdz as Bob so respectfully puts it) cycling in Glasgow, in fact around 32% of people using bikes in Glasgow are female. Another fact (although lets be honest, Gob doubts either Gobber is a fan of the fact), is that the majority of folk heading up cycling campaigns and projects and councils and sport and writing great stuff about cycling in Scotland are women. There's our Sallys, our Suzannes, Tricias, Lesleys, Daisys, Lees, Katies, Cats and even our Lady Anna Princess of Hearts to name but a few. Heck maybe even Bike Gob, but who's to know.

Oh, and then there's Nab and Rigels shared homophobic tendencies too.

It's all really rather embarrassing for The (Daily) Herald to be honest. Had they heeded the many letters and complaints to the editor about Rab/Robert's wilful hate against a so called "group" of people, that leads to drivist behaviour risking life and limb of those people, they may have recognised that this so called jokester shares views with other well known Gammons that you would have hoped the Herald would give no platform to. But they didn't take heed, and so Bike Gob fully expects to see Herald columns from more red-faced Farage-a-likes shared on twitter in outrage soon. Well done The Herald for failing to uphold the decent standards of journalism we need to keep the print news industry on it's feet. That's sarcastic by the way.

And of course well done to Rab McNeil and Nigel Farage for your joint award of Bike Gob's Gobble(s) of the Year. Gob is sure you'll be able to work out an amicable method for sharing your non existent trophy. You can divide it between the cabinet for your non existent humour and the drawer you keep your hate disguised as moral high ground smug grins in. Now BEAT IT. THE BOTH OF YOU.

Next time...something else.  Big love gobs. Peace out. x 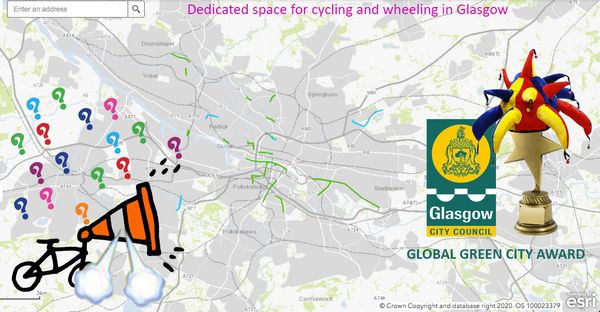 What a year gobs eh? What a year. Globally we've had a cycling boom, a Netflix revolution, and Tao Geoghegan Hart won the Giro d'Italia. Not sure there's been much