Avid Bike Gob fans will know just how much of a big fan BG is of Pishmas, and so it is with great pleasure that Gob brings you here, a seasonal tale of winter woe, one to sit around the fire and tell the little un's, a tale of ice, of snow, of social media bustups, of winter road maintenance plans, a Council Muppets Carol, if you will, in fact Gob has deemed to name it, A Winter's Stooshie. And so it began...

Twas a good few nights before Christmas (November 26th to be precise), and snow had fallen. Being a hardy soul, Bike Gob wheeled out their trusty steed, doubled up their gloves, and took around half an hour to pull on their neoprene shoe covers. Nearly three hours later, once Gob had applied an appropriate level of layering, our hero hit the roads for a jolly yuletide roll. But all was not well: 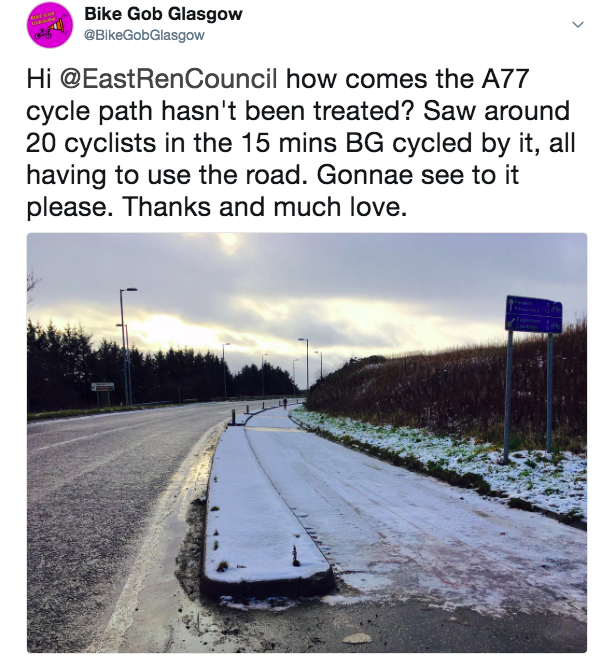 Not one for playing the shrinking violet, BG took the brave upfront approach of moaning about their woes anonymously on an online social media platform which (o' joy!), did indeed seem to reach the powers at be. 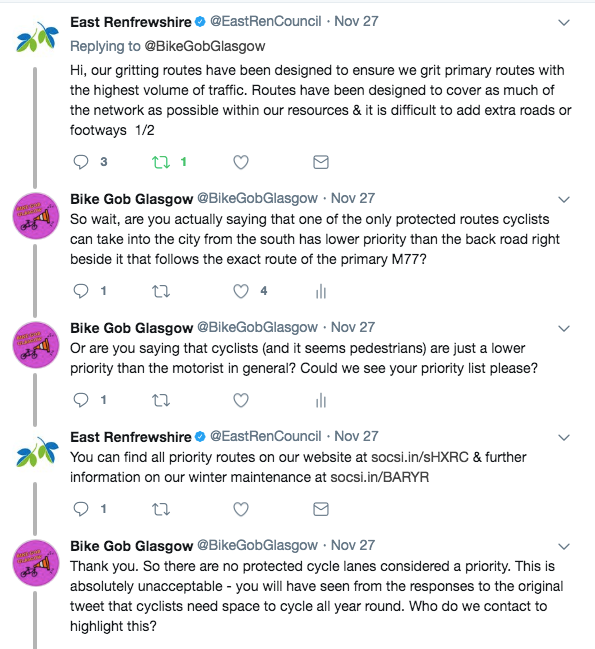 But Gob's glee was not to last. For alas dear reader, our hero was henceforth referred on to the well known void of the "Muppet's Customer Service". But thanks to awesome local other gobs (not the actual heroes of this tale please remember o' friend), a stooshie had begun to brew. 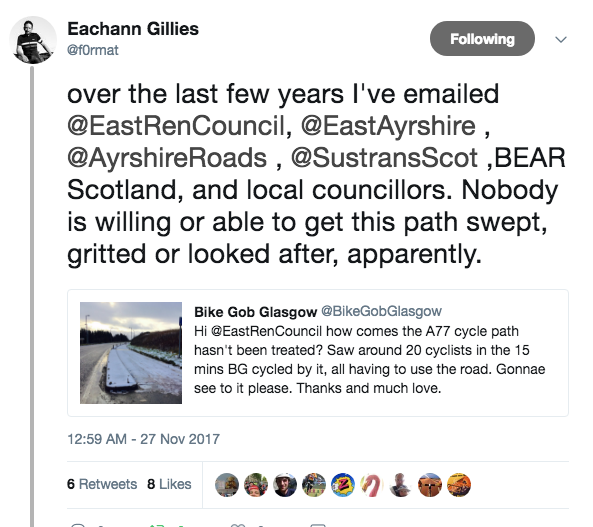 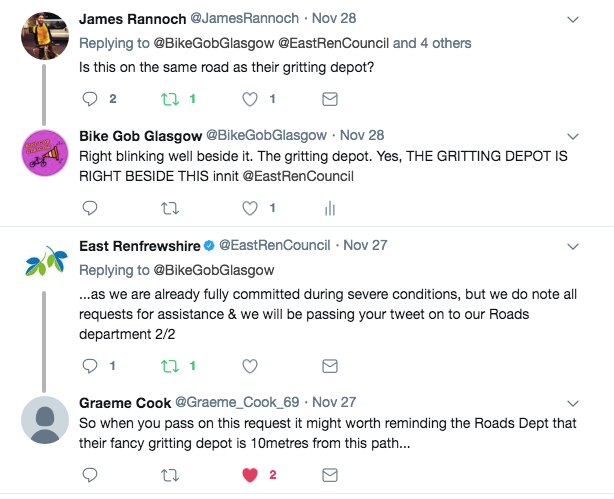 And hence the subject of the conversation banter shifted south to the generally well loved South West City Way, within the muppet christmas council area of Glasgow. 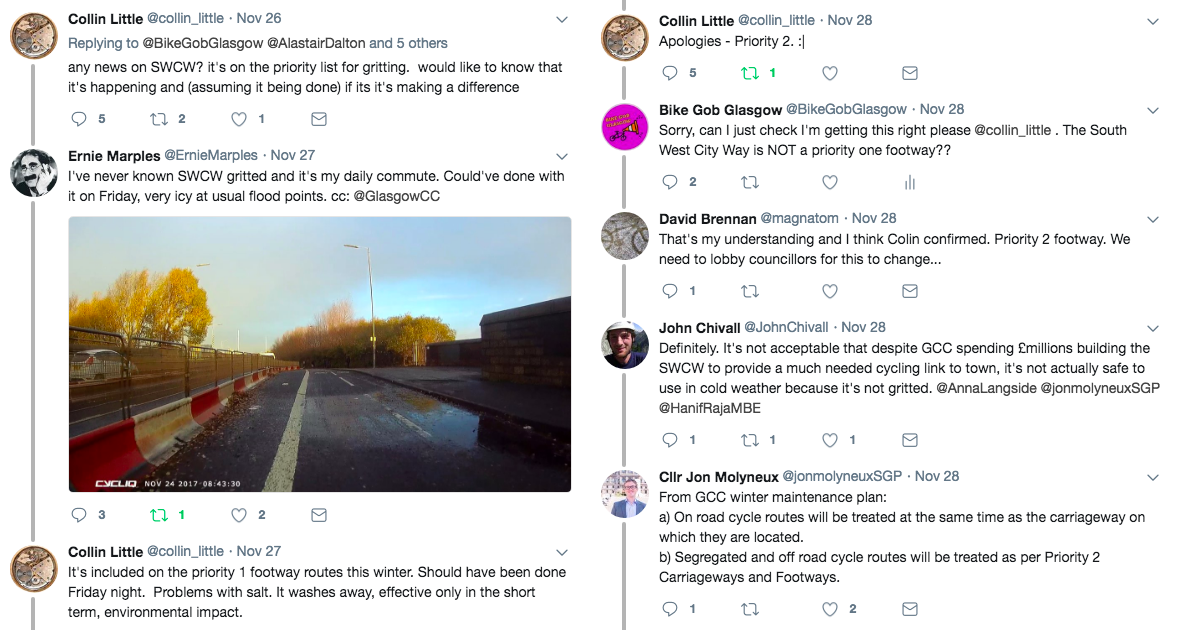 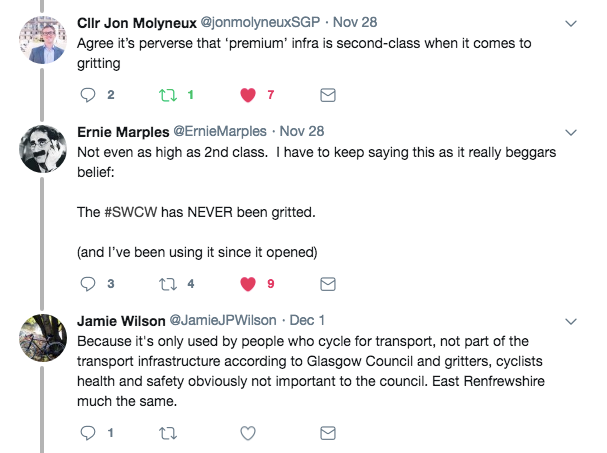 And so our hero (who it will become clear to you, dear reader, is taking the majority of the credit for what will come to pass, for such is the prerogative of the author), put out a call to arms. 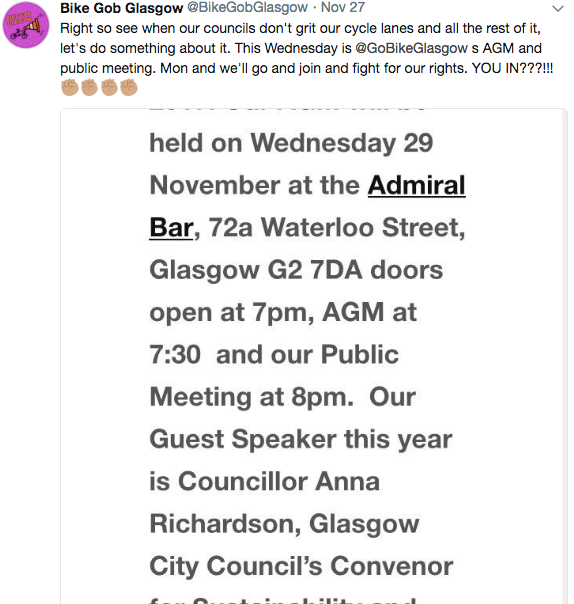 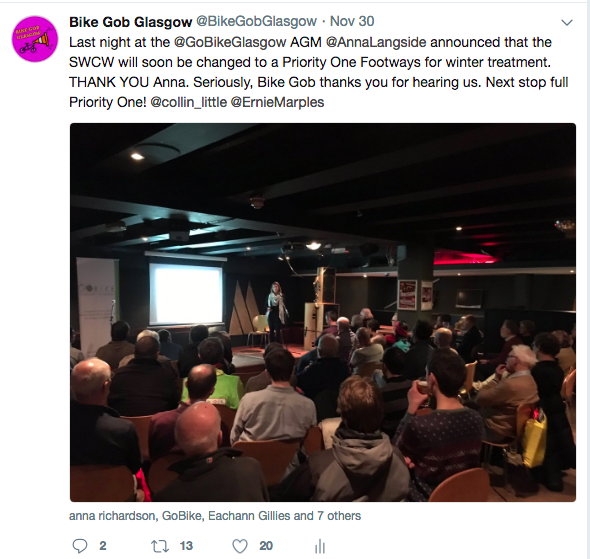 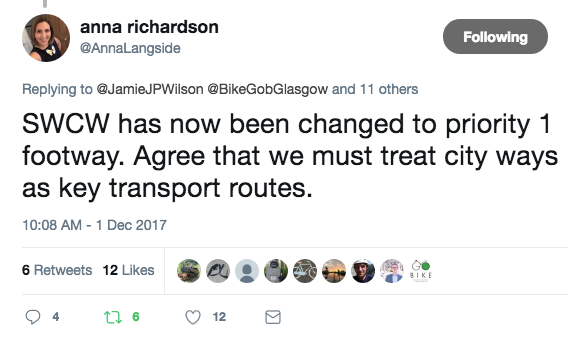 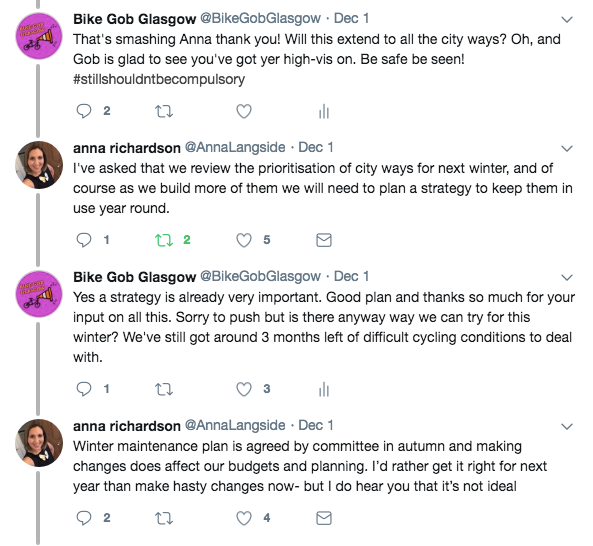 Rejoice! In part! Not the not ideal bit! But otherwise a footstep forward! But alas Little Timmy, Bike Gob's festive cheer was short lived, for but a few weeks later, all was still not well in Winter Stoosie Land. 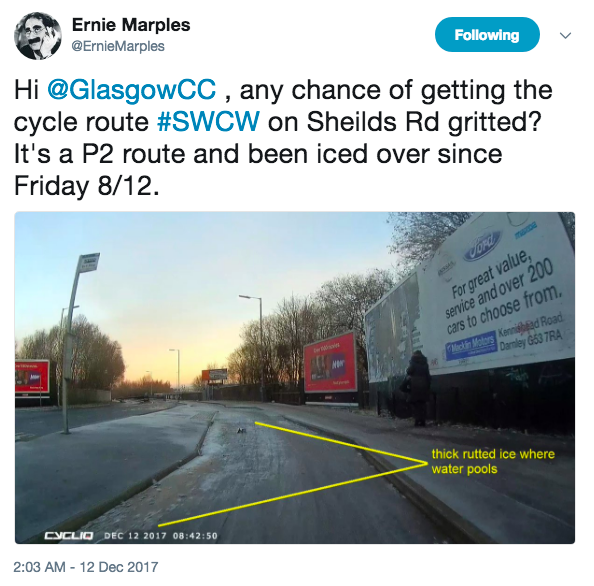 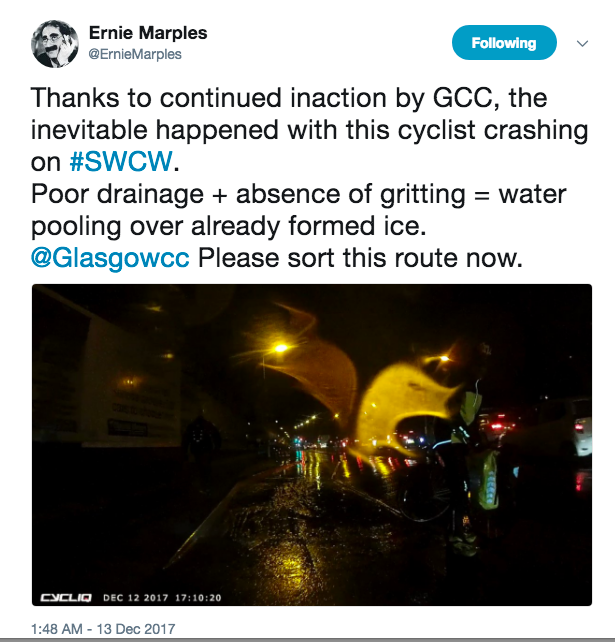 Yet despite the ordeal, a secondary hero emerged. 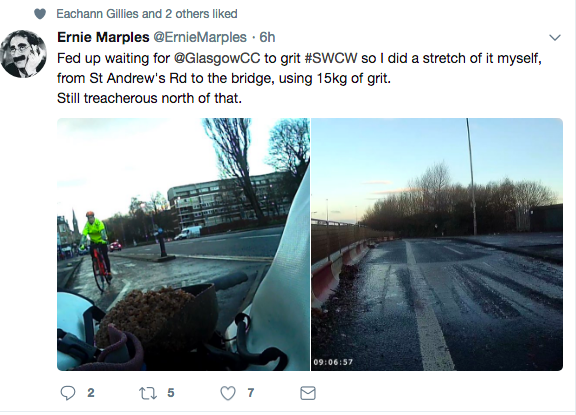 Kudos, Mr Marples, clearly, a handful of grit from a decent gob makes a good point, but what is really needed to make a difference is the large scale muppet machines treatment gobs around Winter Stooshie Land had been promised and so far missing. 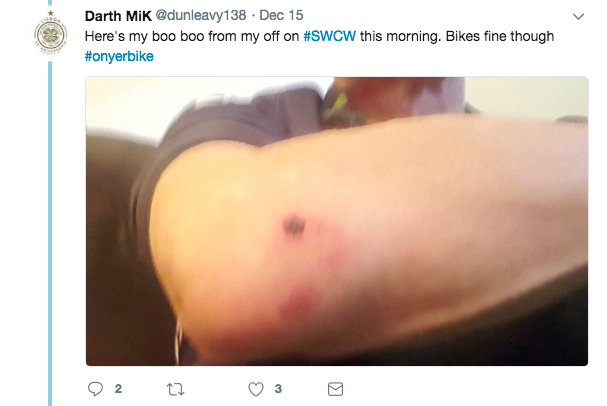 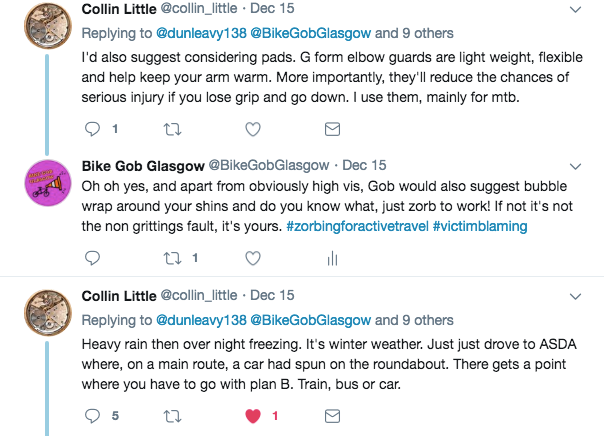 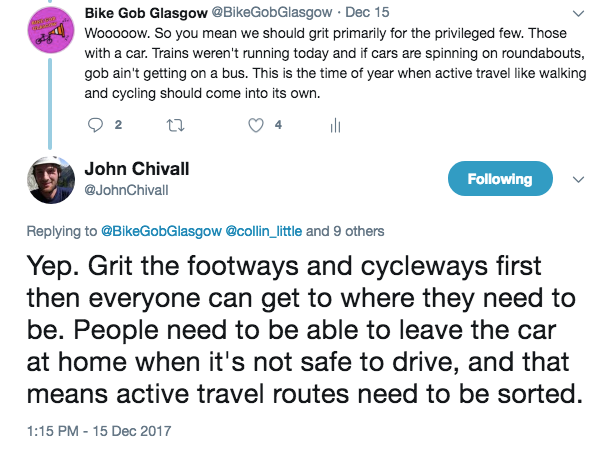 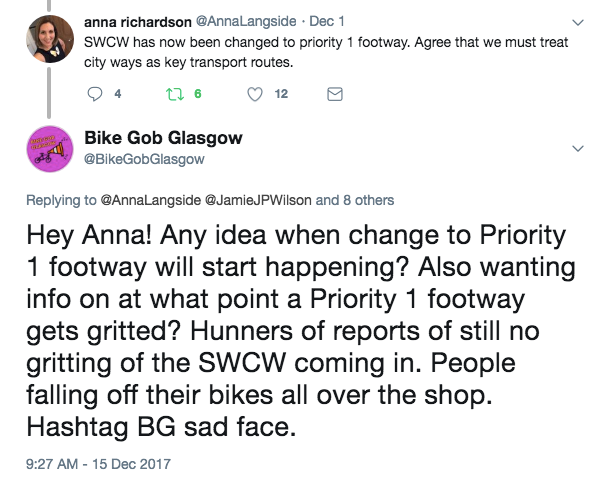 To be fair oh ye, this day had previously also seen the following "that old roasting chestnut" alert. 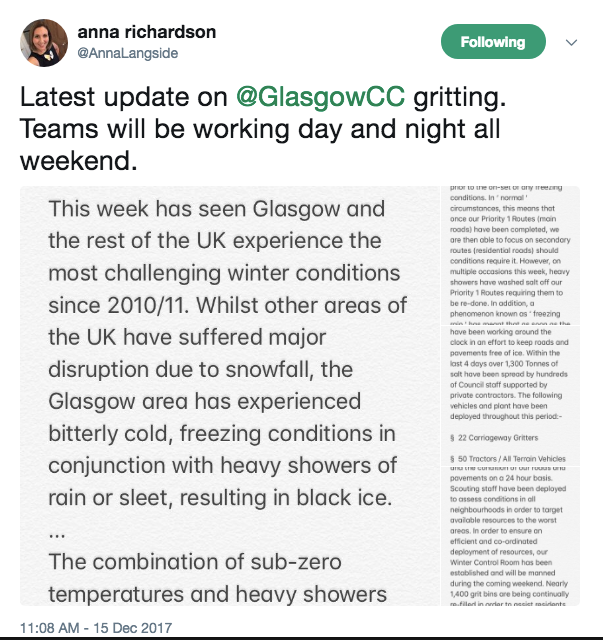 Gob thought to Gob's self, "Challenging winter conditions that perhaps gobs haven't seen for 6 years, but let's be honest yon brethren, we have this chaos on our cycle lanes every. single. winter."

Anyhoo, for this weekend anyway, there is a happy ending. A gritting has finally taken place! And the seasonal angels sang that great bit out of off of Leonard Cohens Hallelujah. (IT WASNT WRITTEN BY JEFF BUCKLEY OR INDEED ANYONE OFF OF POP TALENT OK PLEASE PEOPLE.) 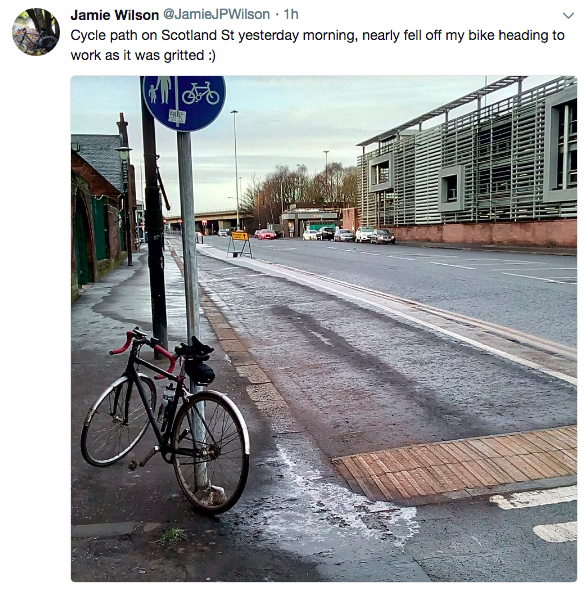 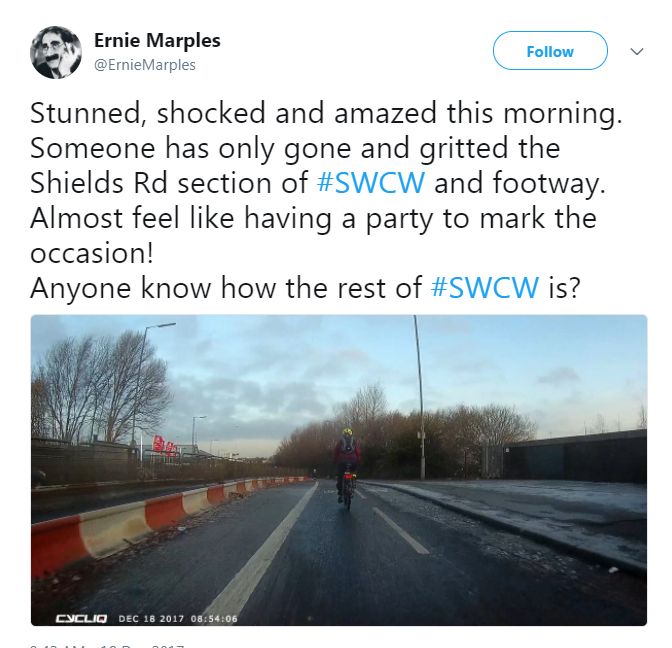 And yea dear reader as all are aware, our hero, Gob, is not into happy endings at this time of year, thus a warning to one and all. Gobs all around have still but three months of winter to go and our tale has won us nothing more than a minor victory on only a short section of bicycle travelling area. Let's hope this new small beginning can last the winter without requirement for another stooshie. Merry Pishmas, everyone.

Oi Bike Gob fans. Where've you been? First sign of a new year and off you all go and forget about your old pal Bike Gob. Bloody charming. Mind you,