Bike Gob is conflicted. Bike Gob has been quiet for a while and here is why.

A year ago I started writing this blog because I wanted to share my love of cycling with others and hoped that they would also find out how life changing cycling can be. I wanted to help to improve conditions for cyclists in Glasgow while at the same time encourage more people to help the planet, their health, their pocket, and their happiness by travelling by bike.

And recently, people around me have actually started cycling, but this is where I've become conflicted. As well as feeling delighted for them, I have also found that I have been feeling worried for them and even a little bit guilty. As I ride around our city on our car-centric roads, and poorly designed and barely maintained cycle paths, I find that I am constantly putting myself in real and life-threatening danger. I've had two collisions, one serious, and too many near misses to count. That's too many near misses to count, on a daily basis. I've heard so many stories from other cyclists in Glasgow of the regular dangers they face. I even witnessed very recently, a fellow rider driven into, smack head on, right in front of my eyes. Amazingly and forever thankfully he walked away with only bruises, but I have been asking myself, do I really want to suggest that more people cycle? Why encourage more people to put themselves in danger?

Cycle, but risk injury or death. It's over dramatic yes, and I truly believe that risk is better than a life watching TV on the couch, but this is actually the choice that cyclists in Glasgow are faced with. And when politicians harp on about the benefits of cycling, their aims to increase bike journey's by whatever percent by whenever they've decided to say this time, and when they point out how bleeding environmental they are to even consider it, they need to take a long hard look at just exactly how they are going to seriously invest in their proposals, in order to allow someone considering taking up cycling to not have on their 'cons' points list, "I might die".

It's frustrating because despite how dangerous cycling is in Glasgow, there are so many solutions to helping more people on bikes not die every day. Obviously way more investment is needed in safer infrastructure. Obviously. But even the paltry little one street stretches of bike lanes that link up to nothing that we are being drip fed slowly over the years feel like they're designed by anti-cycling BMW drivers on work experience. Obviously if you are going to invest in something, design it properly yeah? And what about legislation. Professional drivers in taxis, buses and HGV's are often the worst offenders in poor driving on the roads. Enforce cyclist awareness training on everyone working on the roads. Introduce a driving around cyclists bit in the driving test. Enforce top up lessons and tests to all driving licence holders including questions such as "do cyclists pay road tax?", "when can cyclists ride two abreast?", "can cyclists ride in the middle of a lane?", "when and how should you overtake a bike?" and "are cyclists allowed on the road?". Impose stricter penalties for any kind of phone use when driving. Introduce across the board, police supported automatic fines and extended driving tests in return for close passes. Improve and standardise the police response to complaints from cyclists. Many drivers drive like they've forgotten how to drive, and like they don't realise a car is a heavy dangerous thing that can kill people if they don't pay attention when in control of it. For goodness sakes pass the no brainer Strict Liability Law and remind drivers of this.

It is not my intention in any way to discourage people from cycling. Far from it. What I want is for politicians, councillors, police and drivers to understand that cyclists in Glasgow today are choosing to face serious risks that they can all do something to reduce. I hope that they can all read this and try to understand, and do something about it.

Bike Gob will always choose the bike because the bike is the best way. Bike Gob will let others choose for themselves, but Bike Gob hopes that one day in Glasgow, choosing to ride a bike will be a simpler choice for every gob.

Thank you for listening. 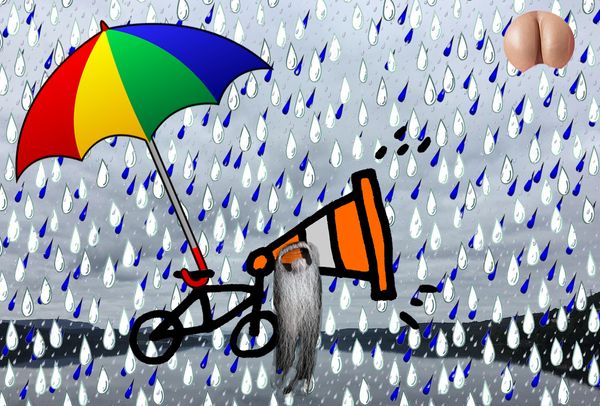 A wise gob once said: "Enjoy the rain my friend, for while it may soak your feet and your hands, gob won't wait for ever (and likes the splashes 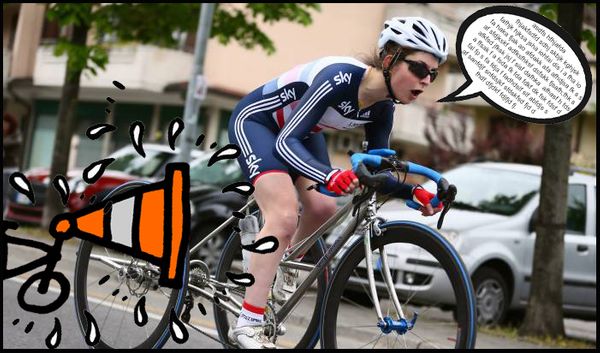 Hannah Dines. Welcome to Bike Gob's Big Interview. As we speak, you are parked up in a motorway service station on route to the Para-cycling World Championships in Switzerland. Wawaweewah!